Alternate Dimensions of Reality is a gen multifandom anthology with two issues.

Alternate Dimensions of Reality 1 was published in 1987 and contains 150 pages. 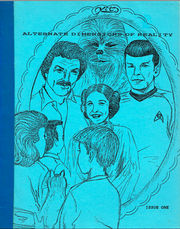 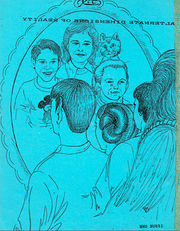 back cover by Kit Chevier

One of the editors says they had the idea for this zine ten years ago.

[from the editorial: We put out our first flyers at a local convention, Equicon, In March, and Chrystal spent the next three months crying, "What if nobody sends us anything?" After that she got on a few of our friend's cases and reminded them that they had promised us some stories if we ever did this 'zine.

Well, we got a couple — okay, one. — inquiry, and with bated breath waited for it to come to fruition. No luck, but near our deadline, we got a — gasp! — submission in the mail!

Now, I don't want to sound like I'm complaining, but if you xerox your stuff before sending it (an excellent idea, the post office is very fallible), make sure that the copy is legible. I_ have to read and type it Into ye old computer. (The only way to run a fanzine! I'm convinced of it!) Oh yeah, since we have a computer to do this thing, if you have a computer that you do your writing on, and if you have a modem, we can download your stuff (if it's in ASCII). Saves worrying if the post awful has lost your stuff in transit. Just send us your phone number and best time to call you.

Maybe it was the long lead time we had for this first issue, but we actually filled the zine before our deadline of October 31st! The nail biting was over illos. My heartfelt thanks to all our artists! (Otherwise, I was going to have to try and draw. You do not want to even think about my drawings, much less look at them.)

Note: the content descriptions below are from the zine itself.

Alternate Dimensions of Reality 2 was published in 1988 and contains 144 pages.