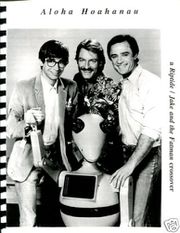 Summary from a distributor, Neon Rainbow Press: "The Riptide detectives travel to Hawaii so Murray can compete in an inventors conference, but their vacation in paradise takes an unexpectedly deadly turn. An escaped convict is stalking Jake Styles, the chief investigator for prosecuting attorney J.L. McCabe. The only problem is, he mistakes look-alike Nick Ryder for his target. Confused, wounded and running, Nick is unsure who is hunting him or why. Bad weather and rugged terrain adds to his trouble, but, luckily, Cody and Murray aren't about to leave their lost companion in the wilderness. However, saving Nick's life only opens up an entirely new danger -- a half-brother Nick never knew about named Jake Styles. As both men struggle to come to grips with the realization, issues of family and friendship become both blurred and more concrete."