Affairs of the Heart

Affairs of the Heart is a slash 172-page Professionals novel by Kathy Keegan, illustrated with photocopied black and white photographs. 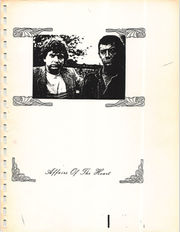 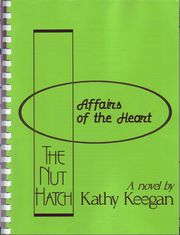 It was first printed in 1988, and reprinted in 1994. There may have been other editions as well.

It has a sequel called Little White Lies.

Not for general sale -- get it for a friend, get it from a friend.

Which means, recommend us to those friends! Please do not copy the text of this zine. It IS a zine, not a circuit story, and The Nut Hatch has to get rid of the copies we have printed so as to break even and allow us to print yet more zines -- your your pleasure. If you copy this zine for your friend, and she passes it on to all her friends, pretty soon everyone has a pirated copy and no one will come to us for one. In the long run, only YOU get hurt, because we'll go broke and stop doing zines. Many thanks for your help! --Kath

Credit where it's due: The photographs are all telepix taken by JJ, and most of them were listed in Entropy's photo list.

The research for the Formula scene was done using copies of Australian Motor Racing... not a bad mag, if you're heavily into the power complex!

The typing -- thanks to Barbie, Angie, JJ.

Pruefreedingk -- Kathy; and if there are typos, that said, you know whom to blame... 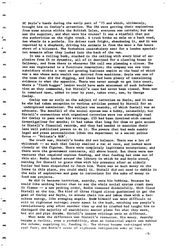 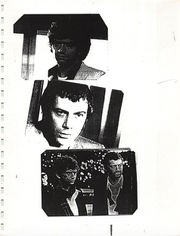 one of the interior pages showing a sample of telepix 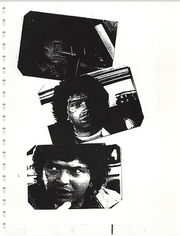 one of the interior pages showing a sample of telepix

It is the first story in the Affairs of the Heart series by Kathy Keegan:

Following a vicious vendetta, Bodie and Doyle are thrust into the world of formula car racing and male modelling [sic]. A story of broken dreams and of love.

Classic contemporary novel of angst, romance and action, by Kathy Keegan—and the first segment in a 4-part series. An industrialist bent on anarchy in England ... a cruel vendetta leading to irreconcilable differences between Ray Doyle and CI5 ...

When Doyle resigns, we follow him into a world of glitter, excitement and disillusionment  the world of the professional photographic model. Bodie is never far away, and as for Cowley—he blames himself for the department's loss of 4/5. What chance that Doyle could be woed back? This is Bodie's "mission," and he chooses to accept it!

The series continues with LITTLE WHITE LIES (CMH #4), A QUESTION OF PRIORITIES (Encore! #1), and ends with SURVIVAL RUN (CMH #12).

Doyle does indeed return to CI5, and brings with him a suite of skills upon which Cowley never hesitates to draw. Further stories take Doyle and Bodie not merely into the world of high fashion and glamor, but into the heart of the USSR... one of Kathy Keegan's best!

Some of you (and you know who you are I) have been waiting six months to read this book... you have it in your hands at last and I hope very much that you will enjoy what you read. This is a story that grew and grew, and didn't want to stop growing. It was intended originally to appear in the third issue of CMH -- but you can see by the length of the text presented here, how impossible it would have been to present it under that cover... Needless to say, the third and final part of Jane's Zax epic, MAGICKAL, has run l-o-n-g, and with this book running away also, you'd have had a CMH #3 that was about 250pp and extremely expensive.

Because of this, it was decided to do this book as a zine-novel. I want to thank the people who put me on the right track (pun intended) as to the ins and outs of Formula racing cars...I did my research and I think it shows.

The next zine out from this press will be CMH #3 -- very soon after you receive this, in fact. What then? Is anyone out there interested in a fantasy zine based on Kin/Bran, Raven/Bodie, plus our vampyres from UNFINISHED MELODY...? There are several spin-offs and sequals, and it would be very interesting to put together a fantasy issue!

For now, let me finish this mandatory editorial space (it's always a mystery to know what to write!), and let you get to the text. I had a great deal of fun in the writing of this book, and hope you will enjoy reading it!

A gripping tale of societal mores and bitter misunderstanding between Doyle and Cowley.[3]

AFFAIRS OF THE HEART, another novel (and its sequel, the novella, LITTLE WHITE LIES) deals with an unfortunate situation that could've happened to either of the guys, but happened to Ray. Ray is forced to quit CI5 and eventually becomes a successful model, but his loving relationship with Bodie remains intact. Even though his his relationship with Cowley may never be the same.[4]

I liked her Affairs of the Heart (even though her German is horrendous).[5]