It was the 49th British Star Trek convention. 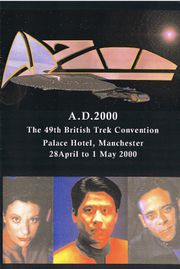 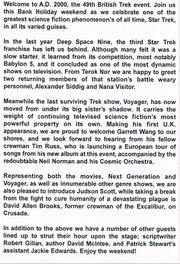 The program book is a dull and slick affair that feels like a strip mall. It contains 12 pages of ads for other cons, and bios and photos of the guests of honor.

I went to the convention on Sunday as a day visitor. The hotel looked impressive from the outside, and even more so inside where the large entrance foyer was filled with Star Trek fans. Most were wearing Trek or Star Wars T-shirts but some were in costume; Starfleet uniforms were popular, especially TNG Lieutenant uniforms, but I also saw Insurrection uniforms, and Admiral uniforms from The Final Frontier era. I registered and collected my agenda sheet and con booklet, a colour picture synopsis of the guest speakers. The main auditorium had one-hour talk slots running throughout the day. I had time for a coffee in the breakfast room where a bewildered hotel waiter served me coffee, double strength, double sweet. I shared my coffee table with a decidedly under-the-weather Jedi Knight (in full costume) who was looking to the restorative powers of Lucasade rather than the Force to help him cure his massive hangover from the previous night's party. On then to the speakers. Robert Gillan, a production worker, gave a very good talk with video extracts of how the transporter effect was filmed and the various camera techniques required to give the multi-angle views of the characters we are so used to seeing. Extracts of Dr. Bashir were the focus of this talk. Then I listened to Nana Visitor and Alexander Siddig talking about filming. Nana was dressed in a white T-shirt, black trousers and black sweatshirt tied over her shoulders, and her platinum blond hair was a pleasant surprise! Alexander wore chinos, black poloneck and red shirt and looked mighty cool! Both actors were a lot thinner than I'd imagined. They talked about their home, a farm, and how Alex is very good at repairs and has built Nana a complete kitchen suite. Judson Scott talked next about his work on The Wrath of Khan, and about other SF work he has done, especially his work on V. Apparently despite the hoards of troupers appearing on the screen for V, there were actually only 12 actors playing those roles! Then came Garrett Wang with an hour's talk. This was a well crafted talk; Garrett did not only rely on questions from the audience (which are interesting up to a point but can degenerate to the "what's your favourite episode / colour / cookie?" level), but also spent about 20 minutes on his own prepared talk about his experiences working the other actors. After this I had to leave, but not without a visit to the dealers' room. I especially noticed some handcrafted weaponry, such as phaser rifles which looked tempting at £25 or so, and highly useful since I was beginning to notice Klingons in full costume and makeup circulating in the crowd...[1]