From Fanlore
(Redirected from You're Hercules?)
Jump to: navigation, search 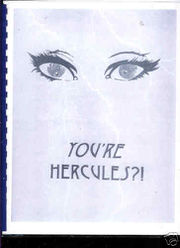 You're Hercules? is a 106-page gen anthology with stories by Linda Chapple and Angela Field. It was originally published in the UK.

You're Hercules, You're Iolaus, and You're Salmoneus DreamCatcher Press Gen rated G-PG13

I ordered these three zines on a whim and found them to be definitely worth the money. The stories are all by either Linda Chapple or Angela Field, and all are nicely plotted well-written adventure stories. They are definitely Iolaus-centric, but there's plenty of Herc too, and both authors have a good grasp of the relationship between the two characters. Our two heroes fight lots of monsters, find themselves in some terribly tense situations, and kick lots of butt.

These zines were originally published in Britain, but the authors have done a good job of catching the American feel of Herc and Iolaus' dialog. A few Britishisms crept in occasionally, but frankly I was enjoying the stories so much that I didn't mind. I'd be hard pressed to choose favorites, but I think Chapple's story "The Flowers of Tartarus," where Herc is poisoned by one of Hera's monsters and Iolaus has to search for the cure in Tartarus, and Field's "Stalk Like an Egyptian" where Hercules, Iolaus and Salmoneus return to Attica and run into their old friend the Mummy, which decides it wants Iolaus as a sacrifice are stand-outs. [1]