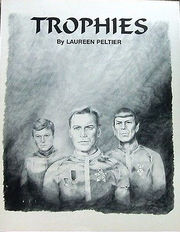 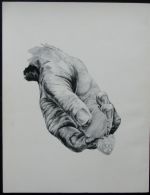 back cover by Anne-Marie Smith

From an ad in The Monthly: "A novel that dares to break through the armor of a hero and discover the man behind the legend. How much must an officer give for duty? How far will Starfleet go to preserve a hero? Join Kirk, Spock, and McCoy in an emotional journey of friendship, loyalty, and personal truth as their bonds of friendship are tested by the duty that holds them together."

Nice cover portraits & nicely presentation are the best points of this zine. It's a jumbled tale full of pompous, mysterious prose, misused vocabulary, poor similes... all in all, very badly in need of editing. Even so, the story was somehow compelling and the character- play pretty good. Admiral Nielson, pressured by the Commission to respond to a 200-year-old plea for admission from the Omega System, sends the old, ill-equipped Zephyr with its green crew instead of the Constitution, because he considers them expendable. They arrive, find the planet's orbit filled with dead spaceships, punch a hole through an energy barrier and are all killed by The Alien, except for Captain Kendrick, whom it inhabits. Meanwhile, Kirk is blaming himself for a failed mission and killed men, and Starfleet is giving him a medal for it. There is a scene with a widow, ruining the PR, and Nielson cancels Enterprise shore leave and sends Kirk under sealed orders to find out what happened to the Zephyr, ordering him to leave them there when he does. Kirk is also withdrawing from his friends. They find the Zephyr, but Kirk can't leave the mystery per orders, so a landing party go down to play cat and mouse with The Alien. Safekeeper, a survivor of the original race beams Kirk into the mountain and explains to him that the Alien is a machine they made to power their planet on the psychic energy of emotions, but it got out of control and killed them all, and if it gets out of the barrier they constructed, which it will do as soon as it learns how to feed on human emotions, it will wipe out the galaxy, turning everybody into "perfect" immortal sparks imprisoned in itself. Or something like that. And for some reason, the savior has to be Kirk. So, with the help of Safekeeper, Kirk tangles with Kendrick/Alien while Spock, McCoy & LeSal try to blow up its generator deep in the mountain. Spock sets the detonator then collapses because somehow he's helping Kirk fight the alien. Safekeeper gets them out, though. Everybody goes home. Nielson is found out. Kirk is called before a board of inquiry, but it's a sham - they are testing him to make sure he would follow his oath rather than his orders. Kirk decides Starfleet was always this way, only his view of it has changed and he can live with that. And the adventure goes on.[1]