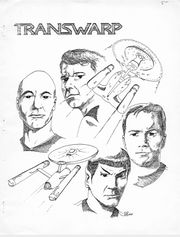 Transwarp 1 was published in 1988 and contains 80 pages. It was edited by Bill Hupe.

A new zine from Bill Hupe, bridging a gap between the generations one hopes. For the first issue, there is a little too much NCC-1701:D. However, that should improve later and the mixtures will become more equally divided.

For me, the best were: Yon Staurf Crew illustration, 'Voyage to Oujongbu' and the poem 'An Afterthought'. 'Voyage to Oujoungbu' features a visit to the 4077 by Spock, McCoy and Kirk. A fellow officer had stolen a vessel transported via time warp to Earth. He has become mentally unbalanced, convincing himself of the need of Technological Advancement by speeding up the 'police action'. Because of Frank Burns (as usual), our space travellers become CIA operatives. They succeed and it is fitting that radar sees the trait from our two ships when they exit our atmosphere.

Yon Smurf Crew are caricature of Beverly, Jean-Luc, Deanna, Wesley, Data, Worf, Tasha & William. ALL in character but with a hint of devil-may-care attached. Well done. The layout, typeface and paper used for the zine is very readable for us visually handicapped. [1] 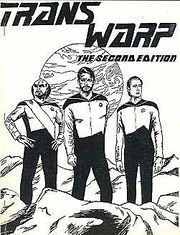 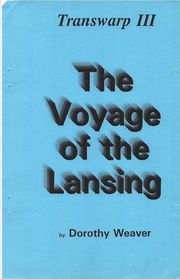 Transwarp 3 is a 93-page novel called "Voyage of the Lansing" by Dorothy Weaver. It was first printed in 1992. The characters are all original characters in the Star Trek universe.

There were at least two printings.

From Media Monitor: "The Lansing is on a four-week shake down mission when a message is intercepted. Upon responding, the crew finds itself embroiled in planetary politics, intrigue, and kidnapping. And, before long, the starship is attacked and damaged, nearly beyond repair."

The genesis of this story came about from the efforts of the Michigan State University Star Trek Club in designing their own starship. Individual members selected their duty station, species and character identity for staffing this ship(which in the future will be going against the emperor's finest). The time frame for the ship's development follows the Classic Trek movies (approximately Stardate 14000). The initial design philosophy for the ship was to create a self-sufficient research vessel, capable of multi-year voyages far outside of the Federation, that was capable of tackling almost any challenge (short of the Borg, which we don't know about yet).

The Captain's logs and some supplementary material used in this story were written by Scott Wallace. Editing was done by James Daggy. The creation this story is part of the club's ongoing Transwarp publishing project.

"Thought-dialog" (that is read by a telepath) is enclosed in curly brackets ("{It was a dark and stormy night??!!}").

In the table (on the following page) are listed the ship's main crew members, their duty station, species and the club member that portrays them when gaming or conducting a murder mystery.