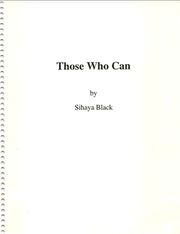 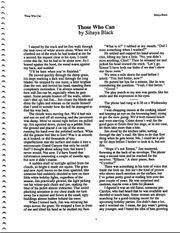 Those Who Can is a 104-page slash novel by Sihaya Black.

Summary: "A love story that includes a look into Jim Ellison's past, as well as a secret organization that has a morbid interest in Sentinels."

I cannot say enough good things about this intricate and fascinating story. A shadowy scientific organization linked to Jim's past is bent on knowing what makes a Sentinel tick, and they'll use any means necessary to get the information they want. There's lots of suspense and surprises, but best of all is the depiction of the relationship between the two men, a vulnerable Jim and a protective Blair, beautifully interdependent. [1]

You may have noticed Sihaya pop up on my Pros list of authors. She writes in that fandom as well, but is more prolific and better known in TS. I'm guessing for most people, this is their introduction to her writing. It pops up on a ton of rec lists for very good reason. This is a wonderful first time, action/thriller, h/c epic that tops out at over 300K. Someone is after Jim for reasons the sentinel and his guide can only guess at. When Jim disappears, Blair goes after him, only to be captured himself. What follows is exciting, touching and sure to thrill any fan of h/c. Both boys get a workout. This is awesome, awesome stuff. [2]

There isn't really alot of sex in this one. There is more plot than anything else. Which isn't a bad thing. If you are looking for a story with a great plot, some UST that sortof gets resolved, and suspense this is one to read. In it a message from some old friends warns Jim of some danger and puts the guys in jeopardy. Yeah, what else is new. Just another day for our intrepid Sentinel and Guide right. This is a wonderful tale, that is extremely well written and I just love the characterizations of Jim and Blair in this. They are so dead on to me. Just enough angst to give this one flavor. Some Jim torture and Blair torture. This is really the only story of hers that I like, she can be a bit on the sex toy side sometimes. While that can be a hot read, I just found her take on it confusing and something I didn't think the characters would do. This story doesn't have any of that though and is one of my favorite Sentinel pieces. You just get lost in it, it is so richly told. [3]

Some people from Jim's past who were like mentors to him bring him some disturbing news. A crazy group wants Jim for some experiments. Along the way Jim and Blair find out how much they mean to one another.[4]

It's just a fantastic story where Jim has to deal with some people from him past that now affect his future. A secret scientific organization wants to put him out to stud! I would never have suspected that. I just thought that they would want Jim to be their Sentinel. Neil and Cynthia were completely forgivable at the end. [5]

I think she wrote both characters' reactions to the situation perfectly...and I found it damn hard to find fault with any other aspect of the story either. So few long stories really hold up over their own length, imo. [6]

The only story I like by this writer and it's in my Top 10 List of the hundreds of stories in the TS universe. Plot. Oh yeah, a fabulous plot with interesting original characters. It's a story I save for rainy, cold days when I just want to put my feet up by the fire and snuggle down to an excellent Jim and Blair portrayal. Makes me feel good. [7]

Still one of my favourite fanfics ever. That said, I haven't even glanced at it in about three years, and I often find myself looking back over stuff I used to like going "Huh? I liked *that*?" Not to say that that's gonna happen with TWC but I'm wary of reccing stories that I used to like. Maybe I should check that one out again ;-) [8]

I like the way Martha and Lemon Drop describe Wendy the reporter in their "Distant Journey, Unknown Lands." In that particular story, I believe, Wendy is working for an independent paper and looking for a scoop after the fallout of the press conference. The authors brought her to new life, I thought. In the episode I felt she was almost type cast and one dimensional. In either case, I disliked the lady. "Distant Journey, Unknown Lands" is one of those surreal, floaty cloud kinda stories that leaves me aching to read more of the same. [9]

oh, absolutely Germaine! This is one of the best plot set-ups in all of TS fanfiction. Their take on Wendy is so intelligent. We get a few brief glimpses - the hair color, the nose ring - but it's woven like a thread thru the scene, not just tossed in a lump at the reader. And the new "look" fits with her new job - Blair surmises she was fired from the old one - which in turn establshes that she's still ambitious and still desperate for the scoop, any scoop.

A number of writers could learn a thing or two from Martha and Lemon Drop. It's very interesting how the dialog, the description, Blair's internal thinking, all come together like clockwork to drive this scene.

Martha and Lemon Drop took a bit of canon and gave it just the slighest twist and set in motion events based on her machinations.

They also took bits and pieces of canon - Jim and Blair's appearance at the door together, the fact that Blair still lives with Jim in spite of the embarrassment of the diss, leading to the following conclusion (which IMHO was brilliant):

"This is how I figure you two were working it. See, Jim pretends to participate in this bogus 'sentinel' research so the police department will okay ride-along status for his grad student lover. The university even pays you for conducting this so-called research. I don't think that's quite what the sponsors of your fellowships had in mind, do you?"

"You're insane," Blair whispered. He was so weak at the knees he had to lean against the side of the building for support. "You can't publish that. It's not true."

So - by the time Blair and Jim make the decision to leave for Indiana, their decision is a logical one in the reader's mind.

Me, too, although I wished a bit later on that they could've just described her as *dead*, preferably gruesomely. <g>[10]

Sometimes, you’re in the mood for a long, plotty adventure with our boys. You want to read a tale with mystery, with intrigue, with shadowy villains who are suitably and believably evil.

When you’re in that mood, what you're looking for is “Those Who Can.”

It has all the details I mentioned above – intrigue, suspense, complex and well-nuanced original characters, an engaging plot that makes you think, and a villain with motive so sinister it’ll make your skin crawl. Though I don’t want to give away the twists, I will say that I have a difficult time imagining a fate that Jim and/or Blair would dread more than what’s cooked up in this story.

I’ve read my share of torture scenes (okay, okay, I’ll be honest – far more than my share), and though these aren’t among the most brutal ones I’ve come across, they’re certainly plenty disturbing - particularly since, in a change from what you generally find, Jim is the primary victim (though the Big Baddies do get in a fair bit of Blair-whumping later on.)

Stylistically, “TWC” is a fabulous example of the 'unreliable narrator'; told from first-person Blair POV, you’ll often find yourself shaking your head in exasperation at the mental contortions he puts himself through to rationalize the way he and Jim interact. .... The sexual tension ratchets up right on par with the tension of the mystery; even though I’ve read this more than once *coughseventimescough*, I still find myself nibbling on my fingernails in the closing third of this epic.

Sihaya has a talent for sheer physicality of her descriptions; her readers are never floundering about in their mental space, wondering exactly where a character is. Her world-building is exceptional as well; TWC is rich in the little details that bring stories to life.

Adventure? Romance? A damned good read? If that’s what you're looking for, set aside several hours and dig into Sihaya’s "Those Who Can." [11]

This is the quintessential Sentinel "case" story - a lovely long story that deserves it's place on most Sentinel rec pages you'll find. This is a story told from Blair's POV and it's delightfully understated and the relationship is developed slowly and beautifully throughout the plot. I can't recommend this highly enough. [12]

Summary: This takes place sometime before Night Shift in Season 3 and diverts, never to return. Jim receives bad news from his past. A couple who helped mentor him after Bud died (in the episode Remembrance) have contacted him after a long estrangement with news that the husband is dying of cancer. He is in a hospital in Seattle and wants to tell Jim something before it's too late.

Meanwhile, Jim is assigned a bizarre case: a Rainier professor has been murdered in a most gruesome way. No one seems to know why, and his loner ways are making it hard to figure out who would want him dead.

On top of that is a disturbing development: Blair's office phone has been tapped, his mail is being opened and his files and journals at work and at home have been rifled through in a very professional way. Is it possible everything is related and, if so, what's the common denominator?

Reccer's Notes: This is a twisty, turny story that plays off a lot of the anxiety-producing themes from canon: Jim's uneven childhood that informs his present abandonment issues, Blair's insecurities over his place in Jim's life, the problematic dissertation, and how realistic Jim's fear of exposure to the outside world might be.

Additionally, it's told mostly through Blair's eyes. While not precisely an unreliable narrator, Blair's incomplete knowledge of Jim's past, his natural loyalty and admiration of Jim, and his naiveté about people in general and himself in particular, all work to blindside him. Written way back in 1998, "Those Who Can" is edgy and engrossing. Enjoy. [13]