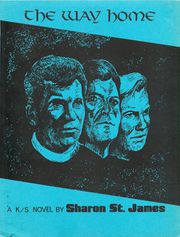 The Way Home is a K/S slash Star Trek: TOS 140-page novel by Sharon St. James with art by Jackie Zoost. It was published in 1990 by Pon Farr Press.

From an ad in Datazine #61: "After Kirk is taken captive and his memory lost, he emergences as Coro, a prostitute with no memory of the past, no memory of the Enterprise, no memory of Spock. But James T. Kirk is still alive somewhere in Coro's mind, and The Way Home is a poignant story of how love and caring bring him home."

Summary from Gilda F: "Six months after Kirk is abducted while staying at an ambassadorʼs home, Spock and McCoy find him as a celebrated prostitute with no memory of his past."

A VERY pleasant read. So the plot wasn't an innovation. Innovative plots are NOT hanging off every fence post! The way she handled it was nice and fresh and she kept it moving. I have read it twice in the two months I've had it, and expect to read it many more times in the years to come, and I know I'll enjoy it each time I do. It's one of those relaxing stories that demand nothing and give you pleasure, (smile) Kind of like a tribble. [1]

I think this 140-page novel was too short for all its plot complications. Kirk goes through severe torture by the Klingons (albeit in flashback/dialogue), four months as a prostitute (also mainly in flashback/dialogue), then has to deal with the possibility of being permanently paralyzed from the waist down. On top of all this is his confusion about his relationship with Spock. While this story contained the author's usual fast-moving, smooth writing, I don't feel it dealt with any one of the above problems in a thorough, satisfying manner. Therefore, as much as I enjoyed what was there, it left me wondering what its point was. The torture was the aspect I could have used a lot more of -- not the acts of cruelty themselves, but their psychological effect on Kirk. Though McCoy continues to probe Kirk through to the final pages, we never do learn what the terrible things were the Klingons had done which Kirk admitted he hadn't even spoken of yet. The story indicates that it will be some time before Kirk will be recovered enough to take command of the Enterprise again, but I wasn't sure why this aspect of Kirk's troubles was sort of skirted around without ever seeming to become a major issue in and of itself. Kirk's as as a prostitute is dealt with more thoroughly, but I still ended up being curious to know more about Rejin and how Kirk felt about him. McCoy makes an important point that Kirk's positive feelings about Rejin stemmed from the brainwashing/torture by the Klingons. Yet, in the end Kirk sends a message to Rejin apologizing for having not said goodbye and says he hopes to see him again someday. I wonder, when all Kirk's therapy is truly over, if he'll still feel that way. I'm not saying he should or shouldn't, just that after McCoy's revelation, and Kirk's seeming acceptance of it, his still-positive feelings toward Rejin were a bit baffling. With all the above having gone on, which was so interesting psychologically, it seemed a shame to have the entire second half of the zine focused primarily on Kirk's paralysis, which is a storyline that's been done quite a bit before (when one includes gen stories), and which did little to help resolve Kirk's problems with his torture and life as a prostitute, since now he had to deal with his difficult with. In fact, it almost seemed like it was a good psychology story that didn't want to be a K/S story. I lost respect for and belief about Spock's feelings for Kirk when he got an erection as soon as Kirk appeared dolled up as a prostitute. That didn't seem like an appropriate way to demonstrate caring and concern after having supposedly been worried sick about Kirk the past six months. It was difficult for me to disassociate the lust from the love, and Spock's claims of love seemed too shallow and trite. I also questioned whether Kirk's feelings about Spock were genuine, simply because I'm not sure how he could separate those feelings from all that had happened. Also, I was puzzled as to why the sexual incident on the shuttle was supposed to mean so much to both of them when Kirk was under the influence of drugs and very confused and mixed up. Despite all the complaints above, I enjoyed this story from beginning to end, and found it interesting and absorbing. I liked it. I simply feel that it had so much more potential. [2]