The Times They Are a-Changing (Real Ghostbusters zine)

You may be looking for the meta essay The Times They Are A' Changing. 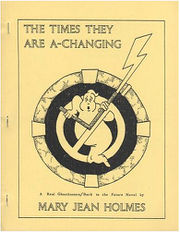 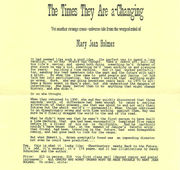 The Times They Are A-Changin' is a gen crossover 174-page novel by Mary Jean Holmes. The art is by Sandy Schreiber.

From a flyer: "Yes, this is what it looks like: Ghostbusters meets Back to the Future. It's odd, it's unusual, it's 176 pages, and it has illustrations by Sandy Schreiber and the author."

From the publisher's website: "It had seemed like such a good idea, the perfect way to spend a long sabbatical, or so Ray Stantz, scientist and Ghostbuster, had thought. Take a month or two off, pull out his life's savings, and spend both doing something he'd dreamed of ever since he was a kid, something he'd been working on and planning and designing for years: building a time machine. And it had worked perfectly, too, sending his test hamsters into the past and future with nary a hitch. So when the time came to send people and Janine Melnitz, their secretary, let him talk her into participating, Ray wasn't worried that anything might go wrong. Sure, she was going back to witness a minor event in Egon's past, but she understood the dangers of interfering. She knew better than to do anything that might change history, and she didn't.

Or so she thought. When they returned home to 1989, she and Ray quickly discovered that three seconds' worth of difference had been enough to cause a serious alteration of their present, one that was about to end not only their futures, but the whole world's -- permanently. When things continued to go disastrously wrong and with time working against them, Ray was sure he'd finally dragged the world to the end of its road.

What he didn't know was that he wasn't the first person to have built a working time machine, that one had been successfully completed four years before by a friend and colleague of his out in California. And he certainly couldn't have known that, at the moment of Janine's fateful error and the explosion of Ray's time machine, that friend had been traveling in the future, had seen Armageddon coming, and had gone back to look for the cause. But what Emmett L. Brown eventually found on November 12, 1989 in New York City was an impending disaster not eve he could have predicted...."