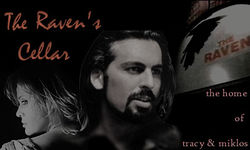 Banner heading the main page of The Raven's Cellar, with Oded Fehr cast as Miklos. 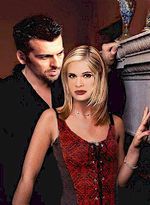 Picture of Tracy and Miklos from the index page of The Raven's Cellar faction site.

The Raven's Cellar is the eponymous website for the Raven's Cellar faction of Forever Knight fandom. It was created by Cousin Mary and Shana Nolan to archive their Tracy/Miklos fan fiction.

The Raven's Cellar was originally at http://www.lisacaps.com/ravenscellar/. The site is first documented in June 2002 and lasted until August 2008. During that time, its contents did not change. The site had a small quantity of fan art, but primarily provided an archive for fan fiction that had previously been posted to the Dark Perks e-mail list.

In 2013, a slightly restored version of the site was added to the Forever Knight Website Archive.

The index page for the site is dominated by a large fanart picture of Tracy and Miklos together, which links to the rest of site. Under the picture are contact e-mail addresses.

The main page of the site is headed by a well-made banner, which is a composite of the faction logo with pictures of the two characters and the door of the the Raven nightclub. There follows a description of Tracy and Miklos, links to the archived fan fiction, and a banner for people to link to the site.

In all the art, the image of the actor Oded Fehr is substituted for that of the actor who actually played the role of Miklos.

The following fan fiction is archived on the Raven's Cellar faction site.