In April and July 2011, LiveJournal was hit by a massive DDOS attack[1] [2], presumed to be the actions of politically motivated groups who sought to stop whistleblowers speaking out about corruption in the Russian government. Also targeted was the Russian president Dmitri Medvedev, who uses LiveJournal.[3]

Fans noticed problems with LJ as they occurred [7], and Dreamwidth-using fans offered invites to the service at DW Code Sharing, and on their personal journals.

Other fans noted how different their fandom experience was as LJ continued to suffer problems: Are we back? For real? Every time LJ goes down, I am reminded of the fact that 95% of my online reading is LJ-based. THIS MAKES FOR VERY BORING TIMES WHEN LJ IS DOWN. I spent a lot of time at Texts from Xavier Academy. STILL HILARIOUS.[8]

During the March/April and July 2011 outages, activity on various anonmemes temporarily moved to the Dreamwidth backup locations of those memes.[9] 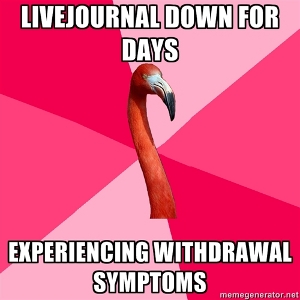