The Further Adventures of Flynn 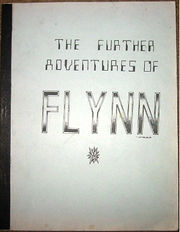 The Further Adventures of Flynn is a gen Tron 118-page anthology of fiction, puzzles, drawings, photos, and poems. It was asking for submissions for the first time in Datazine #23 in 1983.

A fan in 1998 posited that one of the characters in this story was a Mary Sue:

In a story set after the events in the movie TRON, Ashley Borden is brought with Ed Dillinger into the world of TRON and the Master Control Program.

One of 50 typists in the typing pool at Colony Publishers, Ashley is working overtime with Ed Dillinger, who apparently took a job as a typist after the events in the movie TRON. The Master Control Program, which has been looking for Dillinger, brings him and Ashley into its world, where the two are captured and are forced to do battle on the Game Grid.

Ashley finds herself stepping in when he is on the brink of defeat on the game grid, instinctively tossing her disk at the opposing Red Warrior and being astonished when the disk connects: "What can I say? The disk seemed to have a program of its own as it spun the Red Warrior's disk away from Dillinger and looped back to me. I dashed past the surprised guards and out onto the grid. 'C'mon, you creep,' I challenged the Red Warrior. 'Pick on somebody your own size!' That has to rank as not only the most nonsensical but also the dumbest thing I've ever said." But her actions inspire the other prisoners to overwhelm the guards, and the Master Control Program is defeated.

Ashley Borden recognizes that Ed Dillinger, the movie's villain, isn't such a bad guy; she aids him as he battles the Master Control Program in a story which basically is about his redemption.

"Ashley is pretty interesting and competent, eloquent and funny about just how mind-numbing her job is; she keeps a coloring book at her desk to occupy spare moments/slack times at work. She calls the computer she uses at work "Calvin," since "he is blue and manufactured by Kleinco. [1]