The Federation Archives is a Blake's 7 letterzine edited by Linda Terrell. It was published in the US.

It included letters of comment as well zine reviews. It was also one of several zines that was a hotbed for a lot of fan discussion about The Blake's 7 Wars.

From Comlink #36: "The letterzine of 'The Lost Seska,' a B7 un-club that has members write letters of comment on any B7 subject. It is often critical but always fun and enlightening."

"The Lost Seska. This is an information exchange for Blake's 7 Fandom. Contact: Linda Terrell, [address redacted]. Dues, as such, are six 22¢ postage stamps, which will bring you a bi-monthly newsletter The Federation Archives for an unspecified period of time (until the stamps run out?)"[1]

Rules for the FAS: all letters will be in this font, with name and city of writer in ALL CAPS. Editorials will be in italics. No personal attacks will be accepted. Personal attacks should be taken to mean no fan feuds, fan dirt, rumor, or unfounded accusations with names attached. Innuendo is in the eye of the beholder and that's where my editorial decisions WILL stand. Please try to limit your letters to two pages single-space typing or two pages front and back handwritten. I will TRY to print all of the letters eventually. I generally print by DATE, oldest first, but start an FA with several recent LOC's for continuity. Anything over two pages will be edited by having self-contained paragraphs removed which I will save for a later FA but I won't guarantee they will make it to a published page. Please put your whole name and address somewhere on the letter page -- envelopes get lost.

Includes an Early Use of the Term PWP

In 2008, a fan writes that this letterzine had a very early use of the term PWP:

1) From the May-July 1989 issue of Federation Archives (a Blake's 7 letterzine edited and published by L. Terrell), one LoC refers to Oblaque and Oblaquer (two B7 slash zines) thusly: "The editors have also created a new category of story: PWP. It stands for Plot? What Plot?" 2) From the On the Double #13, November 1989 (a slash adzine, published by A. Hughes), an ad from GBH Productions for Oblaquest includes this: "Many fifth season stories and just to lighten the load, a few PWP's (Plot? What Plot?). [2]

It also chronicled the division between slash fans and Paul Darrow, as well as slash and gen fans, as well as publishing a series of widely-distributed and discussed Open Letters and at least two addendum/supplements. See The Blake's 7 Wars.

Please take note that the excerpts from the three below are almost entirely focused on The Blake's 7 War. Other issues of this letterzine have plenty of other Blake's 7 fan content that isn't about this subject.

In the excerpts below, all fan names are redacted as initials. 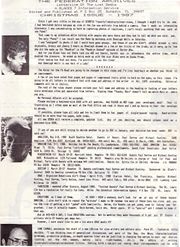 It contains three pages of editorial comments and information by [L T]. At the end of these comments, she writes "And now to the fannish stuff for which we subscribe to this chaos," so this issue must have been longer than three pages. 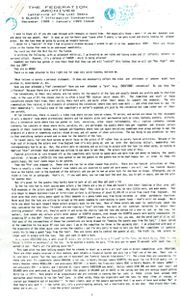 NOTE: [L T's] comments in this issue all relate directly to The Blake's 7 Wars. See that page for much, much more.

This issue was published in February 1989 and contains 9 pages.

Written across the top of the first page: "EXTRA! EXTRA! EXTRA! The New, Revised Special Edition of the SARDONIC VERSUS."

This issue contains the full text of Paul Darrow's 1989 Statement at Gambit, see that page.