The Cost of the Cheeseboard 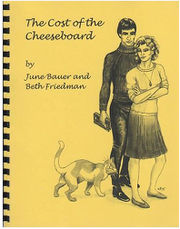 The Cost of the Cheeseboard is a gen 95-page novel by June Bauer and Beth Friedman. It was illustrated by Kathy Marschall. It's a FPF/RPF crossover.

In the early 1990s, Jean offered the series to fans freely via email.[1]

Novels in this Series:

a bag of videotapes

And the Blake's Seven universe will never be the same again.

"This is Karen Breucher. I had a message to call you. If this is about the arrangements for the next Scorpio--"

"Not exactly." The businesslike voice sounded relieved. "I've got a person here who is most--insistent--that he needs to talk with someone from the convention. Hang on a minute and I'll transfer you."

There was a brief pause and a few more clicks. Then a new--and appallingly familiar--voice said, "Heather?"

The room wavered slightly. "Avon. Avon. Omigod. This isn't a joke, is it? Um, what are you doing in Schaumburg?"

Regarding Permissions and This Sequel

Some years later, Beth Friedman wanted to write a story taking up the implied sequel to the original, in which Avon comes back to visit the actors’ world again. She wrote to Jean and to me, asking if it would be all right with us if she did that, and if we would want to take part in writing it. We both said yes, it would be fine with us if she wrote it, but that we didn’t feel like taking part in co-authoring on it.[2]

How did you like The Other Side of the Coin? (I sold my copy since I'd bogged down about half way through it and, despite repeated attempts, never did get back into it. [3]