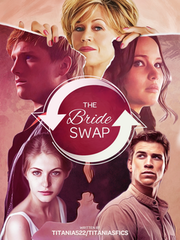 The Bride Swap is a Katniss/Peeta fanfiction written by Titania. It was written for the Everlark Fic Exchange in 2016. The story is set in an AU version of Panem, described by the author as an In-Panem AU. The fic employs and focuses heavily on the popular fake dating trope

The summary reads "Peeta stands to inherit the bakery, but his mother won’t sign the papers until he is officially engaged to a proper Merchant class girl. So Katniss enlists the help of her best friends Madge and Gale, who can just barely stand each other, to fake date and go on double dates so they can be together. Hilarity ensues when it’s time to plan the wedding!".[1]

In a reversal of the typical fake dating trope, The Bride Swap features a very together Peeta and Katniss being forced to pretend they’re dating other people so that he can inherit the Mellark family bakery from his disapproving witch of a mother. It’s the kind of set up that so many sitcoms are based on. And this fic is funny, infused with crisp dialogue and situations that make you laugh and squirm. But underneath that, it is a powerful love story, an exploration of the things people will do to protect the person they love, and a study of the way they elevate each other’s happiness above their own. It’s poignant and heartbreaking and oh so beautiful, with lush descriptions and emotions painted so vividly that you can’t help becoming completely immersed in their world. Everything that Titania writes is like a master class for the fan fic reader, and The Bride Swap is no exception. Go read it now![2]