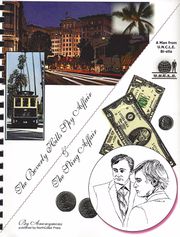 "The Beverly Hills Spy Affair: The heat is on in this fast paced aventure with Illya Kuryakin, a street smart international espionage enforcement agent for the U.N.C.L.E. based in New York, tracking down an old friend's killer in Beverly Hills, California. Kuryakin, a master of disguise, quickly learns that his rogue style doesn't fit in with the Beverly Hills Police Department, which assigns two officers to make sure things don't get out of hand.

Dragging the stuffy, ill-prepared detectives along for the ride, Kuryakin smashes through a huge culture clash in his high-speed pursuit of justice.

The Sting Affair: Set in the early 6o's, this story is about a pair of U.N.C.L.E. agents, Napoleon Solo and Illya Kuryakin, who find themselves in a high-stakes game against the master of all cheaters, Thrush, when they set out to avenge the murder of a mutual agent and friend

Using a bogus bookie joint as a front for their con of all cons, the two feel the heat from Thrush on one side and an encroaching corrupt Soviet agent on the other. But in a plot that contains more twists than a treacherous mountain road, the ultimate scam is pulled off with consummate style and panache.

One of the most entertaining movies of the early 1970's, THE STING is a welcome throwback to Hollywood's golden age of the era that hasn't lost any of its popular charm.

This point in time takes place in the early days of U.N.C.L.E. Illya Kuryakin was very young and newly recruited to U.N.C.L.E. Although already expertly trained in the skills needed in the world of a spy, as part of his indroctrination, Mr. Waverly had sent him to t he Chicago office. The Section One leader wished to rein in the young man's independent streak and receive some valuable lessons in becoming a part of the U.N.C.L.E team. One such trainer was Luther coleman. His special talent was the Art of the Con. Young recruits were often sent to this older agent for instruction....."