The Syfy Network Big Bang was a big bang challenge for fandoms of any show that aired on the Syfy network in the United States. Authors had to write minimum of 15,000 words, and artists had to make two pieces, of a medium of their choice.

Title: A Strange New World
Fandom: Eureka
Author: ranereins
Artist: elektra_lyte
Type: Slash, AU
Word Count: 15,560
Rating: PG-13
Characters/Pairings: Carter/Grant; mentions of Nathan/Callister Raynes, Allison/Tess, Jo/Fargo
Warnings some mild sexual context
Summary: Jack, Grant, Jo, Henry, Fargo and Alison are forced to use Beverly’s bridge device to escape the timeline that they are currently in as the DOD closes in on them. Instead of a new timeline, they find themselves in an alternate universe where things are less than ideal for everyone, especially Jack.

Title: Whatever Helps Us Sleep At Night
Fandom: Eureka
Author: kmoaton
Artist: deadflowers5
Type: Slash
Word Count: 15,020
Rating: Adult
Characters/Pairings: Jack Carter/Nathan Stark
Warnings: Slash, kinda explicit sex, language
Summary: Jack and Nathan have ignored the fact there is some attraction between them. When a new scientist comes to town and makes a move on Jack, it takes a Eureka-style lab accident to make Jack and Nathan see how the things we tell ourselves to sleep at night fade in the harsh light of the truth.

Title: Run to You
Fandom: Stargate Atlantis
Author: lar_laughs
Artist: da_angel729
Type: Het - Hurt/Comfort - Action/Adventure
Word Count: ~22000
Rating: Mature
Characters/Pairings: Ronon Dex/Elizabeth Weir ... Teyla Emmegan, John Sheppard, Carson Beckett
Warnings some language, character injury
Summary: When Ronon finally decides to act on his feelings for Elizabeth (with a little pushing from a certain Scottish doctor), he finds that he still has his past to deal with before he can be truly ready for this relationship. Elizabeth has her own demons to contend with and it only the worst of circumstances that can make them realize that they need each other more than they can possibly understand.

Title: The Best of the Bad Ideas
Fandom: Stargate Universe
Author: Shenandoah Risu (shena8)
Artist: csichick_2
Type: gen
Word Count: around 18,910
Rating: PG-13
Characters/Pairings: Everett Young, Tamara Johansen, Nicholas Rush, The Destiny Crew
Warnings: some bad language
Summary: Stargate Universe, Season 1 Episode 11 ("Space"): What if the communication stones had glitched and Young had been unable to switch back to his body after going to the alien ship the second time? How will the Destiny crew deal with aliens amongst them? And what does it really mean to be an alien? Sometimes the definition is only skin deep.

Title: Fish In A Barrel
Authors: somehowunbroken and clwilson2006
Artist: csichick_2
Fandom: Stargate At;antis/Stargate SG1
Type: slash
Disclaimer: None of this belongs to any of us, much as we may wish it otherwise.
Rating: R
Word Count: 16, 564
Character/Pairing(s): Evan/David, John/Cam, a few minor background pairings
Warnings: rather a lot of character death.
Summary: Someone is assassinating everyone ever associated with the Stargate program. It's not just a small number: dozens are dead before the alert even goes up. It's up to those left to figure out who's behind the murders and stop them before Earth’s line of defense against invasion is nothing more than a distant memory.

Title: Somebody That I Used to Know
Fandom: Haven
Author: wishtheworst
Artist: satavaisa
Type: slash
Word Count: 52,635
Rating: NC-17
Characters/Pairings: Nathan/Duke, a handful of minor characters from Haven and a few minor OCs
Warnings explicit sex, some violence, character death (no major characters), blatant ripping off of an anecdote from a song
Summary: Duke and Nathan used to be friends. When they were, getting out of Haven seemed like the only way to get free of their history there, but getting out and leaving it behind prove to be two very different things. Per-series back story fic.

Title: Sometimes... Love Just Happens
Fandom: Stargate Atlantis
Author: ru_salki99
Artist: gottalovev
Type: slash, romance, fluff
Word Count: 23,364
Rating: NC-17
Characters/Pairings: John/Rodney, Lorne/Parrish (with mentions of Rodney/Keller, John/OMC)
Warnings um... is fluff a warning?
Summary: Post S5 - With the repeal of DADT, comes some misunderstandings that lead to the breaking up of one couple and the coming together of another. A fluffy, domestic piece of good old fashioned romance. 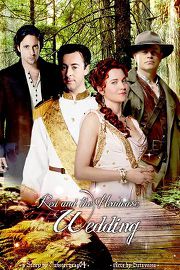 Cover art for Red and the Headcase: The Wedding by satavaisa

Title: Red and the Headcase: The Wedding
Fandom: Tin Man
Author: twisterdrag04
Artist: satavaisa
Type: Het
Word Count: 15,056
Rating: PG-13
Characters/Pairings:DG, Azkadellia, Wyatt Cain, Jeb Cain Ambrose/Glitch, Lavender Eyes, Ahamo, OMC, OFC Ambrose/OFC, Hints of DG/Jeb
Warnings Mentions of violence and mild torture
Summary:Ambrose has regained his memories and his past love and it's time for their future but all doesn't now ease on down the road so smoothly.

Title: Mean Whay You Say
Fandom: Stargate Atlantis
Author: gottalovev
Artist: xmaidelx
Type: slash
Word Count: 16 500
Rating: NC-17
Characters/Pairings: John Sheppard/Rodney McKay, Jennifer Keller (past McKay/Keller), Ronon, Teyla
Warnings: nothing I see as triggery, but there is kidnapping and drugging without consent.
Summary: John is really tired of aliens trying to kidnap Rodney. One of these days, soon, he's going to punch everyone in the face and confine Rodney on Atlantis, if possible in bubble wrap. Fortunately, this time they got him back from the sneaky Terivians before something bad happened, so it was just a bad scare. Or was it? Rodney's acting a bit strangely afterwards, saying things that rattle John's mind. Could it be that his hopeless crush on the man is mutual?