From Fanlore
(Redirected from Supernova (zine))
Jump to: navigation, search

Supernova is a het Star Trek: TNG anthology. There are five issues, starting at issue #5.

This zine series began as Beyond the Farthest Star and then became "Supernova" with issue #5: "The first four issues are available as reprints from us... Issues 5 and 6 were published by Elizabeth Burnham/Nova Press and are available from under her title of Supernova 5-6, to avoid confusion with us when 'Beyond the Farthest Star' reverted back to us. Make sense? It does avoid having two zines with the same title available from two people at once, especially as Elizabeth has continued her series, and is at least at issue 8 by now." [1]

Supernova 5 was published in 1990 and 167 pages. It is the first zine in this series, despite being called issue #5. 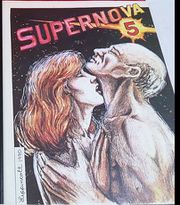 From an ad in The Monthly: "In which Dr. Crusher has a problem that only Jean-Luc Picard can help her with, Worf finds out just what WAS in Barclay's program number 9, Geordi has a most interesting "blind date," we cross a Betazoid in The Phase with a Vulcan in pon farr, Riker (lucky man) helps a Klingon with her experiment."

Supernova 2 was published in September 1991 and contains 159 pages. It is an all Mirror Universe issue.

From an ad in The Monthly: "Our all Mirror Universe issue-- not for the faint of heart. Ever wonder what the crew of the Enterprise is like -- on the OTHER side? Step through the shattered mirror, if you dare!" 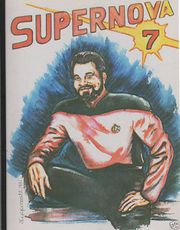 From an ad in The Monthly: "See Q do the Enterprise! See Riker and Shelby and Geordi and Leah -- together again for the first time! See Data get laid (again!). Ok, ok, so you have to use your imagination... Hot stories about your favorites..." 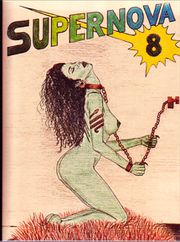 From an ad in The Monthly: "'She's (gasp) -- green, Captain.' Why is Deanna Troi green? Get your copy and find out. Hot stories about your favorite Enterprise crew members from both generations..." 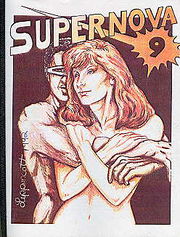 Supernova 9 was published in 1994 and contains 146 pages. It may contain some Deep Space Nine material. Art by R.J. Lippincott, Laura Miles, and Joy Riddle.

From an ad in The Monthly: "'Cover your eyes, Granny! They're doing it again...' Yes, here we are, with another issue of good, clean, adult-type fun."