Starship Britannica is a gen multifandom anthology focusing on the British media. There are three issues of art, essays, reviews, and fan stories.

Starship Britannica 1 was published in 1983 and contains 67 pages. 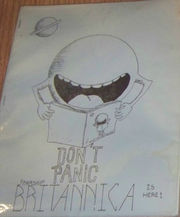 Starship Britannica 2 was published in 1983 and contains about 70 pages. 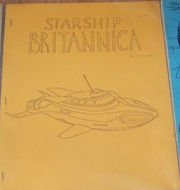 Starship Britannica 3 was published in 1987 and contains 190 pages.

The production of the zine was delayed due to computer issues. In Datazine #44, the publisher writes, somewhat amusingly, that her computers have developed a personality of their own: "TO EVERYONE WHO MIGHT BE WAITING FOR STARSHIP BRITANNICA #3: Due to unforeseen difficulties, SB#3 will be postponed from October to December. First, changing from programming micros to programming IBM mainframes in machine language requires (shouldn't but does) more math credit than I have, and the fall semester has started. Even more seriously, Harriet, the wonderful, hard working IBM PC responsible for getting FOUR zines our between February and August of this year, had a nervous breakdown when she saw the number of disks to be formatted in preparation for SB#3...She'll quite willingly run programs (and did eventually format the disks) but word processing definitely needs a screen ....Peon, the Commodore, only requires a TV and has volunteered. Unfortunately, Peon also requires an RS232 interface board to run the beautiful dot matrix (could you tell) Toshiba Harriet uses. So which ever one comes up to par first runs the word processing software." 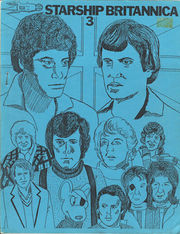 Starship Britannica 4 was never issued. It was supposed to be an all-Blake's 7 crossover issue. Its contents were instead published in Magnificent Seven #9 and New Horizons.