Stargate Odyssey is a gen Stargate SG-1 virtual season zine. It was issued in two volumes (print) and as a single work (CD and PDF). 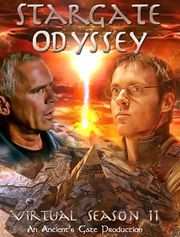 Description from the Publisher

Hello and welcome to Stargate Odyssey. A Virtual Season 11 of the show Stargate SG-1! Join us for the odyssey of the Fifth Race.

The conversation was innocuous, the idea bizarre at first and the result of a plot bunny that begged for attention, but one night during a chit chat that spanned both IM and MSN, the concept for a Stargate virtual season was born.

Our show had ended in series form and gone to movie, and for a brief moment there we wondered if two movies were all we were going to get. We all wanted so much more. So taking the plunge, we gathered in some friends, thrashed out our starting point, and dived in head first to the biggest project we’ve ever undertaken.

Much thought and effort has gone into writing and preparing this virtual season and we hope you get as much delight from reading and visualizing it as we have in presenting it to you. For reading purposes, and for the sake of existing canon, this virtual season takes off after Continuum.

So with Jack back where he belongs and the galaxy at peace for the moment, there is definitely… No Place Like Home.

Episode 1 - There's No Place Like Home by iiiionly and Darcy: Contemplating retirement, yet again, Jack O'Neill receives an invitation to reconsider reuniting his old team under a new regime. Will he step aside and offer this adventure to the up and coming Major Paul Davis?

Episode 2 - That Which We Try To Forget by Annejackdanny and Cancer: While the former and new members of SG-1 are adjusting to the new situation, Ba'al's host makes a call to pledge his allegiance to Earth, offering his help in finding new allies and energy resources. But is he really what he claims to be? General Jack O'Neill and his old new team have to find out - and face some demons of the past along the way

Episode 3 - Team by JAJJAJ: Mitchell and the newly formed SG-13 come together as a team as they join the hunt for some decidedly . . . different . . . Goa'uld.

Episode 4 - Ancients Portal by Taylyn10: On what is supposed to be a simple archaeological dig, Daniel stumbles across a gateway that takes him to another place--and time.

Episode 5 - Hands of the Enemy (Part 1) by Carlyn: The SGC receives a request for help from the leaders on Nyan’s former homeworld after recent events, including a visit by an Ori prior and the rise of domestic insurgents, spark widespread riots on the planet.

Episode 6 - Hands of the Enemy (Part 2) by Carlyn: When the SGC receives a call for help from a former enemy, two teams are dispatched to render aid and foster friendly relations between their two cultures. When one of his own disappears, along with a member of the relief team, Jack O’Neill must decide which is more valuable, the survival of an entire civilization or the lives of his friends.

Episode 7 - Heliopolis' Legacy by DennyJ and Eilidh17: An offworld attack heralds the arrival of a race long thought lost in time and has the SGC scrambling to save lives.