Spirit: Stallion of the Cimarron

Spirit: Stallion of the Cimarron is a 2002 Dreamworks film about an American mustang who is seeking his freedom after being captured by humans. It is one of the most popular films used in animash fanvids. The movie was dubbed into several languages and has a large Russian fanbase. Some characters originate in merchandise only, such as Spirit's father Strider or his unnamed foal with Rain. There is also a Netflix spin-off series, Spirit: Riding Free, that was mostly hated by the fandom.

Scene from an animash with Spirit

Spirit is extremely common in animash.

Spirit and Rain are the only canon couple and the only common non-crossover one, due to the film's small cast. Spirit is also paired with other animated characters of various species, like Kiara from The Lion King 2 or The Great Prince from Bambi 2.

Fans have made their own Spirit Machinima films in the The Sims, including a sequel movie and a remake of the original. 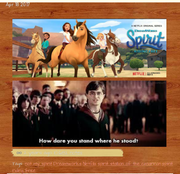 The Netflix series, Spirit: Riding Free, was poorly received by the fandom for three main reasons: its horse captivity, its white settler main character, and its poor animation.

Disney: Hey guess what we're planning a new animated show based on one of our movies! It's going to explore the world and relationships of Tangled as well as add new characters, while still staying true to the source material!

Dreamworks: Oh, cool, we're doing something like that too!

Disney: Really? What is it?

Disney: Oh, that movie that got you guys a ton of awards?

Disney: The one about the horse who won't let anyone ride him and instead lives free?

Disney: And the one that discusses the antagonistic relationship between the Native Americans and Colonists? Dreamworks: Yeah!

Disney: Wow, cool! There's a lot of potential for a show there! What's the series about?

Disney: Dreamworks what the fu
when cartoons rule the world

So yay for that- but I’m very worried about the fact that the show seems to be mainly about this white settler girl who owns Spirit’s kid which concerns me because WHAT HAPPENED TO THE INDIANS?

Spirit’s Native American Tribe friends are replaced by a white settlement… Are they going to acknowledge what happened to the Indians in this (Probably not since it’s a kids movie). Why didn’t they just make it about a little Indian girl and avoid having to either acknowledge or bury the Native American genocide?

You know It’s kind of messed up if the main character of Spirit riding free is the daughter of the man who built the railroad tracks. In the actual Spirit movie those tracks were the reason Spirit when through all that crap. Kinda twisted to get the daughter to ride him after all that madness. After watching half the episode It’s terrible and full of cliches… And if that Spirit in the show is actually Spirit’s son that’s still messed up tho.
Saiathequeen

HI IM STILL MAD ABOUT THE ‘SPIRIT RIDING FREE’ ABOMINATION DEFILING THE WHOLE SPIRIT OF THE SPIRIT: STALLION OF THE CIMARRON (2002) #IT WAS ANTI MANIFEST DESTINY AND IT WAS SO IMPORTANT
razzledazzy