From Fanlore
(Redirected from Space Patrol (1962))
Jump to: navigation, search

You may be looking for Raumpatrouille (1966), a German live-action series. 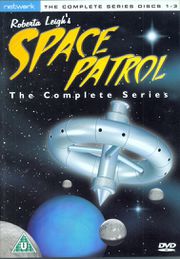 Space Patrol (known as Planet Patrol in the USA, to avoid confusion with a 1950s American series of the same name) was a 1960s British science-fiction television series filmed using puppets and model vehicles. It was filmed in black and white on 35mm film with a very small budget. There were three thirteen-episode series. Spin-offs included a few annuals and strips in various children's comics, the last published in 1967 - see the Wikipedia article for the full list. Although the show first aired in 1963 the copyright date on early episodes is given as 1962, when filming began.

The basic premise was simple; In 2100, Earth, Venus and Mars are united in the United Galactic Organization (UGO). Space Patrol is the UGO's interplanetary police force; there doesn't appear to be any equivalent of a naval fleet, though missiles are occasionally launched from the planets. The series focused on the crew of Galasphere 347; Captain Larry Dart (of Earth), the Venusian "Slim", and the Martian "Husky". Both of the latter looked more or less human; Venusians were lightly built and have been described as resembling elves, Martians were stocky, loved eating (especially sausages), and spoke with Russian accents. Their controller was Colonel Raeburn, aided by his Venusian secretary Marla, with technical support from Professor Haggarty (an Irish scientist) and occasionally his daughter Cassie. Haggarty's pet Martian Parrot (known as a Gabbladictum Bird) was fluent in many languages and was sometimes taken on missions where its ability was needed.

Unusually, serious efforts were made to keep the science plausible for the period's knowledge of astronomy. The ships used antigravity engines and "meson power units" rather than rockets but space travel still took weeks to months for the longer journeys, and the crew were usually in suspended animation for most of the flight, while robots operated the ship. Mercury was uninhabited and hot, Venus was hot and wet but otherwise Earthlike, Mars was largely desert with few energy sources. The outer planets were uninhabitable without life support, but had life which was adapted to their conditions. Alien languages could be translated by the "Elektran", a portable device, but this wasn't an instantaneous process; recordings had to be analyzed on Earth and the results programmed into them, with a vocabulary of a thousand or so words. Unusually for series of this type, technological developments stayed in use after their invention, rather than being used for a single episode then forgotten. There were also story arcs, such first contact with friendly aliens from another solar system, and subsequent trips to their world after they give Earth an FTL drive.

Because of its limited budget puppets and stock footage were often re-used; typical examples included a view of a futuristic city with passenger capsules moving through transparent tubes, the takeoff of the Galasphere, and scenes aboard the galasphere etc. In one episode Husky was too ill to travel so he was replaced by another Martian - and the audience was told that all Martian men looked alike, so that the same stock footage could be used. Effects were necessarily a little limited, by budget and by the period in which the series was made, and there was some period-typical sexism in its portrayal of Marla and Cassie. Despite these flaws it was very popular in the UK, and attracted fans when it was shown in the USA; the most prominent is probably J. Michael Straczynski, creator of Babylon 5.

After the series ended it was believed that the original films had been destroyed, but a few episodes survived on 16mm film and were occasionally shown at science fiction conventions, sustaining the show's reputation despite the poor quality of the worn-out film stock, and were transferred to tape, first reel to reel video, then VCR, as the technology became available. Eventually a full set of 16mm film transfers in better condition were found in Roberta Leigh's loft. They were cleaned up and digitally remastered, and released on videotape (with a postcard, a still from the series, accompanying each tape) in 2001. The full series was released as a DVD boxed set in 2003 with many extras. For some reason the set was only briefly available, and now commands very high prices. The entire series has now been remastered at Blu-Ray resolution, but no extras are included. Low resolution versions of all episodes are currently (2021) viewable on YouTube

Despite its comparative obscurity the show is still remembered fondly by its original audience, many of whom can still recite some or all of the Galasphere takeoff checklist:

Fan activity originally revolved around copying and distributing the few recordings that remained, and collecting the comics, annuals, and toys (jigsaws and a few models, all rare). A fan-made video walk-through of a Galasphere and some edited clips that seem to find the word "Uranus" amusing are the only fan-works that appear to be on line at present, but there may have been some fanfic in pre-internet media. A Galasphere is seen briefly in Starships! (Monochromatic Remix Vid) at approximately 53 seconds.