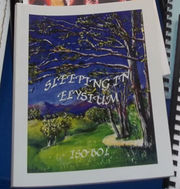 Sleeping in Elysium is a K/S slash novel by Isabol.

The summary for the story at the K/S Archive says that the zine version was actually incomplete: "This novel was printed in a zine last year but due to miscommunication the complete version was not available." [1]

Description from the publisher:

A story of a promise reluctantly denied and love stretched to its limits.

Where James Kirk goes missing. Although he is eventually found by Spock, when he recovers his condition is as puzzling as his unexplained disappearance. His ordeal has left him in am almost a vegetative state; unresponsive to the world around him. Worse still he no longer knows his friends.

Dr. McCoy to a decision that Spock cannot accept. Thus, taking matters into his own hands, the Vulcan sprits Kirk away, determined to bring the man he knew and loves back to reality. Then just as it seems his tremendous efforts seem doomed to failure, Kirk begins to show signs of improvement. With Spock's diligent care, his friend begins to recover. That recovery, however, is only partial. Spock is left dealing with two personalities that change places at random. A child-like, gentle, loving being, an autocrat what cannot forgive Spock for failing to keep the promise he made. They resume their lives aboard the Enterprise where a hardened Kirk finds himself in a constant battle with the child-like being that remains deep inside him. That battle leaves him unable to feel compassion or love, for anyone, even Spock. Will a crisis that threatens Spock's very existence bring those two beings together or will Kirk remain the bitter, unfeeling person he has become?

As the story unfolds, the cause of Kirk's dissapearance is revealed, and although the journey is twisted, the path is followed to conclusion.

[comments on the prose]: Kirk is tortured for information and becomes a vegetable. Against his previously stated wishes for them to 'pull the plug', Spock takes care of him and through many months of therapy Kirk seems to be getting better, but they realize that it's not that Kirk is getting his old memories, but that a new personality is developing. A twist occurs wherein you find out that Kirk isn't gone completely, but he hid inside of his own mind. When some of the old personality comes back, the cruel unfeeling side, the old and new personality fight for dominance. Truly I can't put it into words how fascinating and intricate this story is. It has so many moral issues, and it by far has the most heart-wrenching and devastating scene when the crueler Kirk personality is in charge during a catastrophe and, stripped of his compassion and care for Spock, he runs the seriously wounded Vulcan ragged and just, no words. Will probably make you cry, but it is worth it and some of the imagery is breathtaking and the author captures beauty and love so perfectly.[2]

[comments on the prose]: How someone can weave the countless threads of a story this involved into a coherent pattern is beyond my imagination. Isobol appears to accomplish it with ease. My thought processes tell me it’s complicated, yet reading it never becomes a bothersome chore of sorting through what’s happening. The story flowed very, very smoothly for me. The sinister scheme behind the capture of James Kirk and his subsequent encounter with the mind-sifter is made clear but never overwhelms the true plot, which involves Kirk’s and Spock’s struggle with the most challenging personal crisis of their lives. “Sleeping in Elysium” is reminiscent of some of the early novels like “Nightvisions” in that it is very character-centered. It is a roller-coaster ride from start to finish, with twists and turns and sudden stomach-churning drops into deep emotional chasms. There are many touching and resonating intervals that soothe your senses and bring your heart into your throat. We see a Kirk we have never seen before, a Kirk that could have been wimpy and incomplete, but is instead a charming, completely vulnerable soul whose hidden talents shine through his limitations. Just as we – and Spock – welcome this new personality into our hearts, something happens to plunge us once again into despair. Is it possible we want to see Kirk remain as he is? Do we wish him to live out his life is a loveable shadow of his former self or are we able to face the consequences of his further recovery? This is a dilemma that both Spock and McCoy grapple with throughout much of the story. Both do so in a way that shows us their strong resolve and inner strengths as well as their very multifaceted love for their captain and friend. While Kirk is the focus of Spock’s and McCoy’s attention, theirs is not blind single-minded devotion. They are written as very real people filled with doubts and concerns about the nature of Kirk’s recovery as well as self-doubt regarding their actions and involvement. There is a point where they almost come to dislike the man they’ve given so much to save. It’s a very tricky slope they’ve agreed to ascend, and we are privileged to see just how difficult it becomes to have made the decision to see Kirk through this. “Sleeping in Elysium” is an impressive and enduring human drama. [3]

[comments on the art]: We are so very fortunate that this talented artist has chosen to showcase her work in our K/S zines. Her amazing illustrations in “Sleeping in Elysium” is but the latest example. There are many wonderful images described in this novel, and I would have been able to imagine them to my own satisfaction without drawings, but to see them brought to life – ten of them no less – is a very special treat. Ms. Mueller draws both men in a very realistic fashion and this zine contains two of the most gorgeous nude snuggle scenes you’ll ever hope to see! One is in the grass beneath a large tree that is significant to the story and one, done in a different style, shows them on a bed. Both convey their love in a tantalizing way that just makes you say, “ahhhh.....”

It’s my understanding Ms. Mueller draws from memory and I would love to have been there with her when she saw these scenes!! The wondrous part is that her being able to bring them to paper allows us all to get a glimpse of the love she depicts so breathtakingly well. Kirk kneeling, cradling Spock’s head beneath his chin, his fingers tangled in the dark hair, is among the best I’ve seen. If not for unsuspecting visitors, I’d plaster it on the wall in front of me! In this picture Kirk’s other hand is entwined with Spock’s and both expressions are intense, as if the two have finally realized the depth of their love.

An integral part of the novel is a brain-injured Kirk’s ability to work with horses, especially his empathy with them, and we find the artist evidently knows horses well, too. She captures these moments of enchantment perfectly. I like the cover also, in that it depicts a landscape that is familiar when you’ve read the novel and is something that you can take on the train or to the waiting room at the doctor’s office and not be afraid someone will see it. Just don’t let them see inside!! Or, on the other hand, perhaps it would help nonbelievers to understand this special love that we K/S fen understand and appreciate so much. [4]