From Fanlore
(Redirected from Shuttle Oberon)
Jump to: navigation, search

The Oberon Group, originally Shuttle Oberon and later USS Oberon, was a Star Trek club out of Citrus Heights/Sacramento, California. It was an affiliated club of STARFLEET: The International Star Trek Fan Association, Inc. 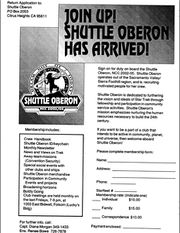 The club started as "a fledgling chapter, or 'shuttle' under the sponsorship of the USS Simonov of Fairfield, CA, then the Flagship of Starfleet, International."[1]

Sign on for duty on board the Shuttle Oberon. NCC 2002-05. Shuttle Oberon operates out of the Sacramento Valley/ Sierra Foothill region, and is recruiting motivated people for her crew. Shuttle Oberon is dedicated to furthering the vision and ideals of Star Trek through fellowship and participation in community service activities. Shuttle Oberon's mission emphasizes nurturing the human resources necessary to build the 24th century. If you want to be a part of a club that intends to be active in community, planet, and universe, then welcome aboard Shuttle Oberon!