SPNBigBang_Era was a big bang challenge in Supernatural fandom, it was open to all characters and pairings, but the stories had to take place in a historical era prior to the 1990s. Writers had to write either a 10,000 or 20,000 word story, artists had to create artwork/manips that had to be 500px x 500px.

Title: In Vain
Author: jennytork
Artist(s): LJ handle unknown
Pairing(s): Sam/Jessica
Word Count: approximately 10,760
Rating: PG-13
Warnings: Violence and gore, though nothing stronger than is shown on the show. Canon character death, though only one happens as in canon. Genderbending of minor canon character. Stilted (to us) language -- it is the Regency era, after all....
Summary: When their father goes missing, Dean Winchester comes to get his brother Sam at college, and they head off to find him with the supernatural nipping at their heels. It's the story we all know -- set in 1815. What changes will come because of the time period? What stays the same? 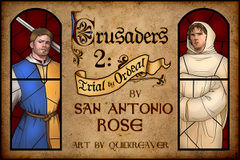 Art by quickreaver for the fic Crusaders 2: Trial by Ordeal

Title: Crusaders 2: Trial by Ordeal
Author: ramblin_rosie
Artist(s): quickreaver
Pairing(s): Gen with background het (Dean/Joanna, John/Mary)
Word Count: 22,627 plus notes (or ~21k plus "Then" and notes)
Rating: PG-13
Warnings: Non-graphic descriptions of Viking torture, allusions to attempted non-con, gratuitous Anglo-Saxon, crass comments by Brother Asce
Summary: After the massacre in Carthage, Missouri, in November of 2009, Gabriel and Castiel decided the best way to thwart the Apocalypse was to take the Colt back in time to 1147 and help Dean of Winchester and Brother Samuel of Rievaulx kill Azazel during the Second Crusade. But now that the angels have gone back to the future and taken the Colt with them, it seems like all Hell is out for revenge on Dean and Samuel. Will the family survive this ordeal and keep history on the (new) right track?


Title: Shine A Light
Author: fullmoon02
Artist(s): hotcoffeekisses and tsuminoaru
Pairing(s): Dean/Castiel, a hint of Sam/Anna
Word Count: 10 017
Rating: PG-13
Warnings: Nothing, really. A death of a cat, perhaps?
Summary: The story takes place in 1975 when The Rolling Stones is touring in USA. Sam and Dean are going to the concert but they have just two days to make it from Kansas to Memphis, Tennessee. The journey goes less than smoothly but they get to meet some awesome people (like Castiel) on the road. 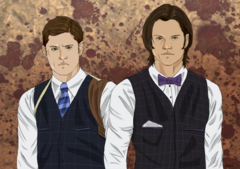 Art by sammycolt24 created for the fic Slingshot

Title: Slingshot
Author: leighannwallace
Artist(s): amberdreams, sammycolt24
Pairing(s): None
Word Count: 10,500
Rating: T
Warnings: None
Summary: The Winchesters and a powerful witch? Never a good idea! Especially in this case, since she was powerful enough to send them on a slingshot trip back through time. We've got multiple eras, snarky boys, grumpy Bobby and read on to find out how Lizzie Borden and a T-rex can fit together in the same story! Hope you all like it cause I had a ball writing it!


Title:The Crown and the Lance
Author: fine_feathered
Artist(s): hotcoffeekisses
Pairing(s): Dean/Cas
Word Count: 37k
Rating: NC-17
Warnings: Minor character death, explicit sex scenes, blasphemy, homophobia, gore, alcoholism
Summary: War has passed and peace is upon the Kingdom of Salvation. Jousts are now common affairs, which Sir Dean of Winchester competes in to earn prizes for his ailing county. Yet when Dean is bested by an unknown competitor and saves Prince Castiel from a failed assassination attempt his life is torn apart as he is forced to confront old nightmares and memories. A medieval AU rife with assassins, treachery and emotionally crippled princes and knights.


Title: A Dreadful Symmetry
Author: bellacatbee
Artist(s): 2blueshoes and burdenedbones
Pairing(s): Dean/Castiel, Adam/Michael, Brief Anna/Balthazar, Past Castiel/Balthazar
Word Count: 37, 213
Rating: NC-17
Warnings: Attempted suicide, sexual assault, homophobia, explicit sex
Summary: After a failed suicide attempt, prompted by his father’s death and a love affair gone sour, Castiel Novak is persuaded to visit the prisoners of Newgate prison by his pious older brother, Michael, in the hopes of lifting his depression. Castiel finds himself drawn to one of the inmates, the enigmatic Dean Winchester, a man committed for fraud. Dean appears equally fascinated with Castiel and soon confides in Castiel that he has had contact with the dead. Castiel is at first sceptical but unexplained events prompt him to rethink his stance on the supernatural. However, the Governor of Newgate prison warns Castiel that no good can come from his association with Dean. Is Dean all he seems, or is Castiel the victim of an elaborate con?