The Robin Hood Big Bang Challenge was a big bang challenge in Robin Hood TV series fandom. Authors had to write a minimum of 15,000 for the first tier and 30,000 words for the second tier, artists had to make a minimum of one banner.


Title: Search and Rescue
Author: kegel84 and bron_v
Artist: midnightdream__
Rating: PG
Pairings/characters: Will, Djaq, Much, John, Guy/Marian, Robin/Marian
Summary: Robin and Guy have to team up when Marian seems to have disappeared, AU after Lardner's Ring. 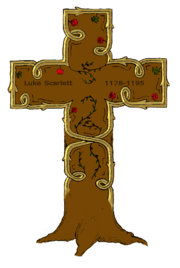 Art by queerlyobscure for The Carpenter and the Wood

Title: The Carpenter and the Wood
Author: tania_sings
Artist: queerlyobscure
Rating: R (one semi-explicit sex scene and some violence. Overall, it's pretty tame.)
Pairings: Luke/Kate, Luke/OMC, Luke/canonical male character so obscure he might as well be an OMC, Kate/OMC, Will/Djaq, Much/Eve
Warnings: Slash and het, violence, character death
Summary: The life and loves of Will and Luke Scarlett over the course of one lifetime.


Title: The Final Testament of Sir Guy of Gisborne
Author: jedi_of_urth
Artist: shinysparks
Rating: R, most sections are below that but overall I think it should be rated that
Pairings/characters: Guy mostly, but also Isabella, Thornton, Vasey, Davina, Robin, Marian, Edward, various 3x10 characters, and various OCs. -Guy/OFC, Isabella/Thornton, Guy/Marian subtext
Warnings: Dark themes, violence, some sexual content, and warnings specific to section 2.5 that will be discussed then. Spoilers for the whole series.
Summary: As Guy is dying he reflects back on his life, a life he’s finally made enough peace with that he can admit his failing and his mistakes.


Title: The Force of Destiny
Author: railise
Artist: ?
Rating: PG to PG-13, each chapter marked accordingly
Pairings/characters: Pretty much everybody, with mostly canon pairings
Spoilers: While this alters the end of S2, there are still a few spoilers for the whole run of the show, including S3.
Summary: Affairs in the Holy Land have a better outcome for the gang, but little has changed when they return-- at first. But as the outlaws' numbers grow and the end to their troubles comes into sight, can they truly get the happy endings they deserve?.


Title: The Wolf's Head
Author: corrielle
Artist: shinysparks
Rating: PG-13
Pairings/characters: Guy, Djaq, Marian, Allan, John, and Will. Guy/Marian-ish
Spoilers: This story goes AU before "Will you Tolerate This?" However, some Season 1 canon events are referenced.
Summary: Robin cannot defy the Sheriff for fear that Vasey will hurt his mother, and Guy must decide whether he will choose power or conscience.


Title: Written By Time
Author: ladylovelace
Rating: PG – 13 (chapter 11 is NC-17)
Pairings/characters: Much, Robin, Guy, Isabella.
Warnings: None
Summary: Much comes to Locksley as Robin's manservant. Isabella is pleased to be back in France, Guy is not.