The Robin Hood BBC Big Bang Challenge was a big bang in Robin Hood (TV series) fandom. Authors had to write a minimum 15,000 words, and artists had to create a minimum of one piece of a medium of their choice.

Crossfire
FIC by emmithar and kegel84
ART by theonlyspl
Characters: Robin, Will, Gang
Pairings: Robin/Marian, Djaq/Will, though nothing heavy
Rating: PG-13
Spoilers/Warnings: AU from mid S-2
Summary: Robin has his hands full when two members of the gang find themselves in trouble. Robin must rely on the help of a traitor in order to save them.


The Longest Time
FIC by kegel84
ART by laura_isabel
Characters: Robin, Marian, Much, Will, Djaq, John, Allan
Pairings: Robin/Marian, Will/Djaq
Rating: PG-13
Spoilers/Warnings: AU from mid-season 2
Summary: When the king returned, everything would be right again. But the day King Richard came into the town of Nottingham, Robin and the outlaws had to notice that things didn't turn out as they had always thought in the back of their minds. 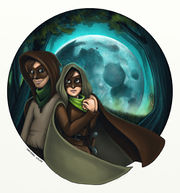 Nocturne
FIC by railise
ART by shinysparks
Characters: S1 outlaws, Marian, Edward, Vaizey, Guy
Pairings: Robin/Marian, hints of other canon ships
Rating: PG
Spoilers/Warnings: Begins the morning after 1x13; AU from there.
Summary: When Marian and Edward are forced to flee Nottingham and the sheriff stages "the Night Watchman's" execution, it quickly becomes evident that the masked figure was as important to the peasants as the outlaws are. Robin has a plan to right the situation-- but it seems he's not the only one.


To Cozen Fortune
FIC by roh_wyn
ART by shinysparks
Characters: Guy of Gisborne, Isabella of Gisborne
Pairings: None, hints of Isabella/Thornton
Rating: PG-13
Spoilers/Warnings: Spoilers for 3x10, "Bad Blood"
Summary: Guy and Isabella leave Locksley and arrive in France to make a new life for themselves. A pre-series exploration of these two characters and how they become the people we see on the show.


The Tragedy of Men
FIC by smaragdbird
ART by neaptidea
Characters: Robin, Much, Richard, Thomas and quite a few OCs both historical and not
Pairings: Richard/Phillip of France, Much/Thomas
Rating: NC-17
Spoilers/Warnings: violence, torture, death
Summary: Much and Robin have been part of the Siege of Accre for a year now while battles, illnesses and difficulties with supplies take their toll on the men. In the middle of this Much and Robin are captured by the enemy to be sold into slavery. Robin as a noble can buy his own freedom but Much remains captive unless Robin finds a way to free him. Robin does, of course, save him in a very dangerous and risky coup and they return to see the fall of Accre. Still, tension runs high between Richard and Phillip of France while Richard contemplates marrying his sister to Saladin's brother. In the meanwhile Much befriends the Knight Templar Thomas who is no less reckless than Robin but still confuses Much a lot more than his master ever did.

The Alchemy of Love
Fic by an_lagat_glas
Characters/Pairings: Guy/Marian/Isabella/Robin (Guy/Marian, Marian/Isabella, Isabella/Robin, Guy/Robin); a teeny bit of Allan/Will/Djaq. A few necessary OCs.
Rating/Warnings: R. There will be violence, mention of domestic violence, and explicit sexual content in later chapters.
Summary: During her last Nightwatchman gig before her marriage, Marian is caught while helping a woman in need through the forest. Grateful for her aid, Isabella convinces her brother to spare Marian and a friendship is born. Though each have their own goals, Guy, Robin, Isabella and Marian are forced to work together to heal old wounds, learn to trust, and ultimately save Nottingham.


Different Directions
Fic by emmithar
Characters/Pairings: Robin/Marian
Rating/Warnings: PG-13; AU.
Summary: Robin suddenly finds himself in a different world, a twist of time, in where he did not travel the Holy Land. While it gives him what he wants the most, a life with Marian, he soon discovers that life in Nottinghamshire is far worse than he had ever imagined. Being used as a pawn by the sheriff, Robin must find a way to right the wrongs, but furthermore try to discover what happened to his previous life, or if this new reality always was the way things were...


Secret Missions, or: Outlaw Stories from Another View
Fic by kegel84
Characters/Pairings: all the s1/s2 main characters, two "OCs" ;-), Robin/Marian, Will/Djaq/Allan
Rating/Warnings: PG-13, no warnings.
Summary: The sheriff is trying to find spies, Allan is playing both sides, and the question is whom one can trust at all.


The Story of Your Life
Fic and ART by shinysparks
Characters/Pairings: Guy/Kate; will later torment the gang and probably Isabella.
Rating/Warnings: R for sex, violence, and profanity
Summary: The adaption to forest life had been going well for Guy of Gisborne... at least until a serious lapse in judgment in a moment of passion caused him to do the unthinkable: have sex with Kate Potter. Now, with a baby on the way, he and Kate must not only learn to be parents and raise a child in the forest, but also to tolerate each other for more than five seconds...


The Sum of Our Choices
Fic by roh_wyn
Characters/Pairings: Marian, Robin, Allan, Djaq, Will, Guy of Gisborne, Vaizey, OCs (in approximate order of appearance).
Rating/Warnings: PG-13; no warnings for this installment
Summary: On a trip to his favorite tavern, Allan makes a gruesome discovery that has dramatic consequences for everyone, and especially Marian.


Travelers Returned
Fic by ladykate63 and tangofiction
ART by ladykate63
Characters/Pairings: Marian, Guy, Djaq, Will and Isabella in Chapter 1; in later chapters, also Robin, Allan, Vaisey, Much, Little John, Tuck, Kate, Prince John, King Richard, Eleanor of Aquitaine, several other canon characters as well as OCs. Guy/Marian, Robin/Marian.
Rating/Warnings: PG-13 in Prologue and Chapter 1, will go up to R in later chapters with some NC-17 material.
Summary: Believed to be dead in the Holy Land, Marian of Knighton returns to Nottingham to find herself embroiled in political intrigue, conflicted over her relationship with Robin, and forced to deal with a man she never expected back in her life: Guy of Gisborne. Mostly follows S3 canon up to the start of 3x08 ("The King Is Dead, Long Live the King").