Queen's Own is the official Mercedes Lackey fan club. 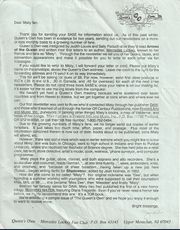 a 1990 letter of introduction to fans

From the Queen's Own newsletter: "Queen's Own is the official Mercedes Lackey Appreciation Society. Our purpose is to share our enjoyment of Misty's worlds. We are a fan-run not-for-profit organization not a business... This newsletter is published solely to inform and-entertain the club's membership; no infringement of anyone's copyrights is intended."

Due to lack of funds, this club ceased in May 2000 and was replaced by Queen's Own, a online newsletter [1].

From August 1989, a bit about its origins, from the August/Sept 1989 newsletter: "A little over a year and a half ago, [and about 373 members less,] Judith and I, with a skeptical Misty's blessing, sent out our first fanletter. It was the result of our having fallen in love with Misty's concept of Valdemar and its inhabitants, and being absolutely certain that we weren't the only ones." [2]

In August 1998, Judith turned the reins of the club and newsletter over to Robin, and reminisced:

It's 1987, and two women who have little in common other than a love of reading have just finished Arrows of the Queen. Both are so impressed that they write letters to its author, Mercedes Lackey. Imagine their delight at getting handwritten replies, and their surprise at finding that Misty is not a full-time writer. She is writing in her "spare" time, while working horrendous hours at American Airlines as a programmer.

"Aha," think the two women. "We'll start a fan club for her and make her so famous she'll be able to quit that job and write full-time. There will be even more books for us to enjoy."

Misty gave her okay--well, actually she said, "You are crazy, but if you really want to start the fan club . . . you have my and Teri's blessing, she's putting you in the catalog . .. "--and that is how Queen's Own came into being! [3]

The first newsletter was one page, mailed in February, 1988. It was mostly an introduction, sent to people who had written to DAW, Teri or Misty. We continued with a one page format until January 1989 when we mailed out our first two pager. At that time Misty wrote, "Well, the holidays are over and I'm still behind. Sigh. I am amazed at the number of cards I got (from Australia yet!). Please tell everyone that I'm thrilled and just sorry I couldn't respond individually as much as I would have liked to."

After the March 1990 issue my partner went on to other interests and QO became completely mine. Thus Herald Housemother was born. Thinking of you all as family was the only way I could face the work and responsibility. It was at this time I asked for dues. Until then, QO had been funded by donations and I had run off each issue on my husband's Xerox machine. In October of 1990 Misty finally quit her day job and started writing full time. (No, QO is not taking any credit for that.)

The club continued to grow, as did the number of local chapters, zines, and Collegium entrants. In December 1990 archivist Patricia Riggs reported that we had 62 Heralds, 1 Shin'a'in scout, 1 White Winds Sorceress, and 2 Bards. We had members in Australia, Bermuda, Canada, Englang, Germany, Ireland, Japan, the Philippines, Scotland, and every state of the US.

Misty has always been somewhat bemused by the idea of a fan club: "I figure likeliest when you started this thing that one of two things would happen: either ou'd get 3 people (high probability) or hundreds (low)."

Fan mail startled her, too. She wrote "I was amazed and flattered no end by the letters you sent on. Good heavens, you'd think I was Tolkien or something!"

Yes, Misty, you are definitely something. Something very special that brings out the best of your readers and allows them to be special, too.

Queen's Own has been my introduction to new friends and new experiences, Ren Faires, conventions, zines, filk -- these were all unknown to me before QO. Pen pals? I was too old for such nonsense, I thought. My thanks to all of you for making me feel young again, for letting me be your Housemother, and for sharing so much of your lives with me. Please be as generous and supportive of Robin. I hope you'll keep in touch -- Love, Judith. [4]

A Passing of the Reins

What's going on with the Queen's Own Fanclub?I'm not quite sure whom to contact about this, but I thought either you or perhaps Misty herself (if you would be kind enough to pass along the message) would be a good place to start.

I have been informed by a prospective Queen's Own member in another country that Robin Ready says that Queen's Own went bankrupt in April and folded. The fanclub at large has not been informed as far as I know (in fact, the check I just sent in for three membership renewals was cashed). Robin's e-mail address is not working, and I do not have a current phone number for her.

Does anyone know how to get in touch with Robin? I'm the person who maintains the webpages for Queen's Own, and she has not contacted me about there being any problem at all with the club. All I know is that I have received this feedback from a foreign fan and suddenly Robin's e-mail address doesn't work. This makes me wonder (1) What happened to the money? and (2) What's going on?

Please let me know if you have any additional information and/or ideas about where we can go from here.

[Lackey's response]: All I know is that I got a message on my answering machine saying that Robin was closing Queen's Own down, and when I tried to call, the phone number was disconnected. The email addy I got for her isn't working either.

Since I strictly kept my hands off the fan club, I have no more idea than you why this happened, what happened to the money, or what has happened to Robin. [5]

Due to lack of funds, this club ceased in May 2000 and was replaced by Queen's Own, a online newsletter.