Questions of the Past

From Fanlore
(Redirected from QUESTIONS OF THE PAST)
Jump to: navigation, search 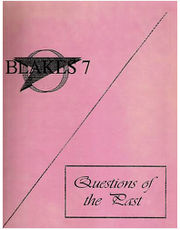 Questions of the Past is a 190-page gen Blake's 7 anthology of stories by Linda Knights. It contains no art and covers all five series.

From an ad in a Media Monitor: "The last of Linda Knight's new and unpublished fan fiction, spanning all the seasons. 'Limitations': Avon soon realized that Gan had a built-in limitator... but did he honestly understand what limitations like that meant, or that others had limitation that were just as deadly but less obvious?"

From the Editor's Page

First of all, thank all of you who are currently reading this fanzine... it was born of a type of desperation. I had all of these "almost finished" Blake's Seven fans stories and I was determined that they wouldn't die unread. And, as these are, beyond doubt, the last whimper of my relatively lengthy Blake's Seven writing career, I also wanted them to stand together. ...So, as look back upon the years of my Blake's Seven writing, my characters get to look back up on the years of their existence.

Obviously, after having written hundreds of page of fiction in this fandom, I have developed some very strong opinions on the relationship between these characters. While my "reading" mind is always open to various approaches, my writing mind has defined these men and women. What you see here, then reflects equally the truth of these people, within my own narrow definition.

I sincerely hope that you ill find the offers within enjoyable. I found them enjoyable to write and a re-awaking experience for me. It had been some time since I had visited Blake and his people. It was fun to become reacquainted with them.

[An Unlikely Hero]: The first half is an extended treat for those of us who like watching Avon savage Blake verbally while trying to protect him at every turn. (Hey, it's canonical!) Sally found the second part dreadfully dull and cliched but Jenny has convinced her to put up with a high-minded slave-trading Mary Sue, in return for the truly evil twist at the end of the tale. [1]

[Dante's Madness]: It's PGP, Blake is *dead* and Sally still loves it! A complicated, wonderfully angsty story about Avon and Blake's clone - for once not a pallid Blake-without-the-Blakeness but a real individual, as fiery, stubborn and wonderful as the real thing. A great story, very long but not a word wasted. [2]

[Dante's Madness]: I cry my eyes out at "Dante's Madness." It definitely rates "FIVE kleenexes" on the Bowen tear-jerker scale. I cry very thime I read it. I'm a masochist, because I did keep rereading it. It is SO SAD! [3]

[zine]: This is a really good zine, especially for the get-Avon fan and the gen A-B fan. There's lots of juicy Avon-torture. In addition to having excellent content, the zine is attractively laid out. [4]

[zine]: All stories by Linda Knights (who, alas, is no longer in B7 fandom), all focusing on Blake and Avon. Mostly above-average in quality and a few absolutely outstanding, including a short story called "A Moment for Contemplation" (Blake reflects on how much Avon means to him as he fights to keep the man alive and on the relationship between caring for a friend and caring for a cause), a novella-length pgp entitled "Dante's Madness", featuring the Blake clone, and "Magick", my favorite cross-over story of all time: a B7/B&B in which 4th season Blake and Avon both find themselves in Vincent's tunnels.[5]

[zine]: I was lent this by a friend a few months ago and it went onto that short list of "must be bought" zines. The cover is as dull as ditchwater, I bought this because I knew the stories to be brilliant, and because I considered the price reasonable at 11.50. I'd recommend this zine to anyone who enjoys an intense Blake-Avon relationship but doesn't want slash. [6]

[zine]: I'd forgotten until I reread it how good this zine is, especially for the get-Avon fan and the gen A-B fan. There's lots of juicy Avon-torture, all very well written. In addition to having excellent content, the zine is attractively laid out. The one thing missing is the art, which apparently was lost in the mail; there are some blank pages that I assume were where the illustrations were supposed to go. But that's the one glitch in an otherwise lovely zine. Recommended. [7]

Questions of the Past is a collection of stories and vignettes by veteran writer Linda Knights. They range from early 1st series to PGP. However, the only story of interest to Tarrant fen is a longish 3rd series story. "Nearly Fatal Mistakes."It's well-written, but rather peculiar. The characterizations seemed a bit off. Unusually negative portrayals of all of them — even Cally. The premise of this story is that Tarrant is having difficulty being accepted by the remnants of Blake's crew. When he loses his temper with Avon and accidentally injures him, the others' lukewarm tolerance of Tarrant turns to outright hatred. (This was necessary to the plot of the story,but I found it just plain unbelievable. Dayna always seemed fond of Tarrant, and 3rd series Cally didn't hate anybody — not even Shrinked. However, the most unrecognizable one was Vila. I simply cannot see Vila being that cold and nasty — certainly not for Avon's sake. Ah, well — in her intro. Linda admits that her view of the characters is set — and somewhat narrow. So I assume she's received other complaints.)

I found this story an interesting commentary on Tarrant's unpopularity in fandom. but can't quite see it in the series. I think it's likely that Tarrant was one of the most popular crew members. He's nice, socially oriented, witty, dependable, and not nearly as insulting as the others. While I applaud Linda's pointing out that Avon was at least as objectionable as Tarrant, I gagged at her explanation that Blake had forced them to accept Avon — the old "Blake is the center of the universe" scenario. I think the post-"Star One" group was at least as tight as the original crew, perhaps more so — and not because of Blake. I did like the resolution to the story. Blake's spirit appears to Avon, and tells him to stop being such a schmuckto poor Tarrant. Tarrant meanwhile, is not about to hang around where he's not wanted. He goes to Avon to demand passage to a planet of his choosing. He's prepared to wrangle over severance pay — and is astonished when Avon instead asks him not to leave. I can't help but approve of Avon's taking responsibility for his crew in this fashion. And, witnessing the reconciliation between Avon and Tarrant, Blake's shade fades away forever. (It reminded me of those old stories where the ghost of the first wife appears to her widower, to tell him it's okay to remarry — and isn't able to rest in peace until she knows he's happy with his new wife!)

About 150 pages, reduced. Nice graphics; computer type-set and laser-printed. No art, alas; apparently, the artist's originals were lost in the mail. (Now there's a lesson on trust — at least where the U.S. Post Office is concerned!) [8]

[zine]: I'll also put in my two cents' worth on the Linda Knights zine QUESTIONS OF THE PAST. Regrettably, I didn't find it as wonderful as Sondra and Rebecca did. OK, but not super great. I think these stories would have been more effective scattered through a number of other zines. I found that the 'Avon seriously injured or ill' theme, which occurred in almost all of the stories, got tiresome when read one after another. Then there was the "bonus story", which had a good beginning, what struck me as a thrown-together end—and was conspicuously missing its middle! I couldn't escape the overall impression that this zine was done to 'use up' stories or parts of stories. On the other hand, I quite enjoyed 'Dante's Madness', and it was one of the longer ones. I thought this zine was definitely worth reading, and at least didn't trash poor Blake as most do; I guess I was just expecting too much beyond that. [9]