A QTE or "quick time event" is a type of gameplay that requires immediate or near-immediate response from the player after the appearance of an on-screen prompt. These prompts usually override the regular functions of the displayed buttons (so if pressing X makes a character jump, pressing X during a QTE wouldn't do that) and are often used for dramatic effect in video games. QTEs are also often used in place of complicated action that players would find frustrating to complete, such as complicated fight sequences. However, the practice of replacing gameplay sequences with series of QTEs is also often criticised for making games less interesting to play. 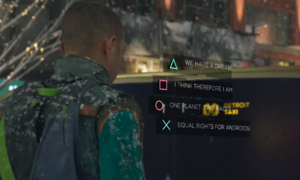 An example of a QTE prompt in Detroit: Become Human.

QTEs, although not always called that, have been a part of video games for almost as long as video games have existed. The first use of a similar concept is in the laserdisc versions of Dragon's Lair, where players have to use specific button sequences to complete the game. Ninja Hayate added the visual aspect of the buttons being shown to the player and Final Fantasy introduced the idea of a specific button presses being done at different times, mixed with other kinds of gameplay. The first game to use QTEs as they're currently defined, however, was Shenmue for the Sega Dreamcast where they were known as "Quick Timer Events," adding the time element to the gameplay style. The release of Resident Evil 4 and God of War in 2005, however, are what truly brought QTEs into the mainstream. Resident Evil 4, in particular, is known for a sequence towards the end of the game where Leon gets into a knife fight with Krauser.

Quantic Dream is known for a QTE-heavy gameplay style where the result of QTEs affects the final outcome of the game but there isn't truly a way to "fail" a QTE.