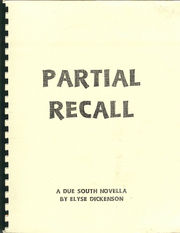 Partial Recall is a 112-page gen Due South novel by Elyse Dickenson.

It may have been the first due South zine published.

From publisher: "Chicago has always been an exciting city in which to work and live, as Detective Ray Vecchio well knows, especially since a certain RCMP office came charging into his life. Ray has his hands full with a multiple homicide at a jewelry store. With no clues, the chances of catching the killers and recovering nearly a half million dollars in precious stones are dwindling fast. To make matters worse, Fraser is hit by a car, and has no idea why a mysterious stranger is after him. And just where is Diefenbaker?"

Well written smallish zine. Would have liked to have seem more emotion in the writing, but still recommended. First Due South zine in print I believe. [1]