Once Upon a Time in Gotham 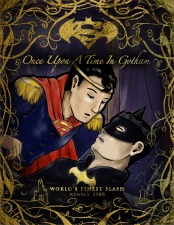 Cover of the zine Once Upon a Time in Gotham, with a stylized version of Superman leaning in to kiss Batman similar to Sleeping Beauty.

Once Upon a Time in Gotham is a slash Batman and Superman fiction anthology. It was published in 2009 and has 142 pages.

The theme for the fanzine was: A re-telling of certain fairy tales and myths with a DCU slant.

Story by Vipers_in_Love | Artwork by LA Buenaventura (R) Bruce and Clark are young men who have been in love forever, but fate decrees that they never act on their feelings. Suddenly, a beautiful, mysterious woman captures Clark’s heart. Has Clark left Bruce behind, or is there more to this bright new romance than Clark knows?

Story by BradyGirl_12 | Lineart by Avium, Color by Rex Barker (G) During a snowstorm, Bruce and Dick are directed by a mysterious figure to an icy castle in a northern kingdom. While Dick recovers from illness, they discover its King has been enchanted and doomed to live a literally icy existence unless someone can truly love him and break the spell.

Story by Saavikam | Artwork by DarkJ3 (G) After Clark is gifted with a set of unusual dolls at a charity fund-raiser on Christmas Eve, the last thing he expects is to spend the night dreaming about fighting the criminals of Gotham alongside the mythical Batman and his Robins. The revelations in his dreams are just as baffling, even as a promise is made to him.

Story by Trinity Helix | Lineart by Avium, Color by Rex Barker (PG) When a young Mer rescues a handsome stranger from drowning, his eyes open to the world above the seven seas. He makes a bargain with the sea witch for legs and a chance to win his heart’s desire, but when the time comes to choose between love and his kingdom, will the choice be as easy as he thinks?

Story by Renaissance Makoto | Artwork by DarkJ3 (PG) Clark Kent is house sitting and finishing his dissertation. Unfortunately, he gets stuck with a rich, arrogant jerk for an upstairs neighbor. One who like to throw very loud holiday parties. Sparks fly when Clark stops being nice to one Bruce Wayne.