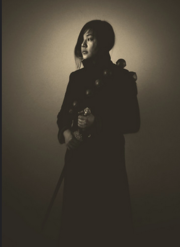 The Old Kingdom, also known as Abhorsen is a fantasy series by Garth Nix focusing on a lineage of necromancers who use their abilities to protect people, rather than using them to do evil. The series consists of: Sabriel (1995), Lirael (2001), Abhorsen (2003), The Creature in the Case (2005) a novella, "An Extract of the Journal of Idrach the Lesser Necromancer" (2005) a short story, To Hold the Bridge (2010) a novella, and Clariel (2014).[1]

I’m giggling, because apparently, Sabriel is a ship name in the Supernatural fandom? I don’t know much about Supernatural, but I do know that the “S a” part probably comes from “Sam.”

But the Sabriel I’m searching the tag for is Abhorsen Sabriel, from Garth Nix’s Old Kingdom books.

And WOULDN’T YOU FUCKING KNOW IT, BETWEEN BOOKS ONE AND TWO, SABRIEL…

THE UNINTENTIONAL CONNECTION IS KILLING ME WITH LAUGHTER.[2]