Not to Know is a gen and het 87-page Blake's 7 novel by Harriet Bazley, her first.

The novel was illustrated by the author. 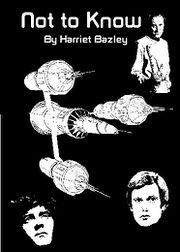 This novel begins with an alternative ending to 'City at the Edge of the World', giving a very good, dramatic answer to a question that many B7 fans have asked: what if Kerril had joined the Liberator's crew?... Vila brings Kerril back aboard Liberator and the news that she brings with her changes all their lives. What is Blake doing, and how does Anna Grant fit into the picture? As the story unfolds, it becomes clear that secrets can have terrible consequences and that acting from the best of motives is not always enough. [1]

Harriet's great gift is for dialogue - one of the things I really like about this novel is that the characters sound like themselves. [2]

This novel begins with an alternative ending to City at the Edge of the World, giving a very good, dramatic answer to a question that many B7 fans have asked: what if Kerril had joined the Liberator's crew? I always believed that her arrival would have significantly changed things aboard; and Ms. Bazley's book did not disappoint me.

The row among the crew about whether or not to accept Kerril is well portrayed, particularly the hostility from some. Despite this, Avon, persuaded by another crewmember, agrees to let Kerril aboard. Once this happens, the latter changes things irrevocably by asking why Blake isn't there, as she had been part of a group who had recently sold him some weapons, although she had not met him in person. After an argument over whether to follow up this lead, Avon decides to investigate, curious as to why, if it is Blake, he hasn't tried to contact him and the others.

They finally meet Blake, who explains that he has a significant chance to reform the Federation, this time from the inside. To succeed, he needed to keep secret, particularly from Avon, the identity of the other rebel leader. Once the identity of that leader is revealed, the reader is instantly aware of the meaning of the novel's title. A sense of impending tragedy pervades the book from then on, as the reader wonders, not if the secret will be revealed, but when it will be revealed and by whom.

While Vila and Cally are glad to have Blake back, and the other leader stills Avon's curiosity, this exposes a division in the crew. Tarrant, who with Dayna, has no loyalty to Blake, still wants answers, and begins to search for the truth. Of course, the truth emerges at the worst possible time.

This is a summary of the storyline; but it is only a glimpse of a very well written work. As well as a well-constructed and believable plot, summarised above, the continuity with the past episodes is very good. The failure in Pressure Point is very much in the minds of the old crew, after Blake outlines his plans; and, on a happier note, there's a reference to Kerril's legs!

In terms of style and language, Ms. Bazley is able to express things succinctly and clearly, giving a nice sense of the B7 universe and of the crew. The use of figures of speech is very good, as a few examples will show. A glare at Tarrant from Vila 'slid off that seamless self-confidence like meteor dust around a force-field'; stealing something was, said Vila, 'as easy as stealing credits from a cadet'; and his operating the teleport gave him a 'nova-proof excuse' to stay aboard the Liberator.

In terms of the characterisation, the characters are well drawn. Blake, if victorious, wants to make some changes on a smaller scale, 'where you can really see results'; Tarrant lacks loyalty to the latter, calling him 'someone for whom I felt no loyalty and had never seen'; Dayna equally lacks such loyalty, telling Avon that 'this [the Liberator] has never been Blake's ship' in all the time she was aboard, also wondering what Kerril saw in a 'babbling incompetent' like Vila; and the latter is determined to persuade the crew to let Kerril aboard, 'drawing on reserves of courage he'd never known he had'.

To conclude, this lovely book is one I would recommend to all fellow fans, due to its plot, style and characterisation, but especially to fans of Tarrant; because his determination to find the truth puts me in mind of what he was like in Powerplay: the clever, ruthless, ex-Federation officer, able to deceive even Avon. [3]