Night of the Lancer Savage Land 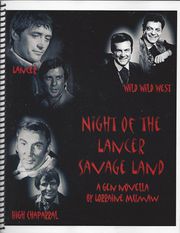 Night of the Lancer Savage Land is a gen crossover h/c 129-page novel by Lorraine Mumauw.

From the publisher: "Scott and Johnny are on their way to a meeting with John Cannon, but things so terribly wrong and the brothers are separated. Luckily they have unexpected help from two quarters, but it still might not be enough to get them out of this one alive."

The dark cloth was roughly pulled off Johnny's eyes and he blinked in the dimly lit tunnel. He stood in a sort of crevice, above him the stone arched until it disappeared in the shadows. He absently rubbed at the spot where the Indian, Santos, had burned him. Glancing around he saw his companions, like him, now wearing leg irons. He had felt them being attached after they had been blindfolded.

West's hair, unlike Buck's, appeared unruffled, as if he hadn't been blindfolded, although his jacket had been removed and his sleeves ripped. Even now he was unobtrusively studying their surroundings. Several goons were guarding them, including Santos.

"Where is my brother?" Johnny directed the question at the Indian, not really expecting an answer.

In return, he was jabbed in the small of his back by another guard. "Go! That way."

"Sure, sure." Johnny stepped into the smaller tunnel he was directed to enter, stumbling slightly with the unaccustomed irons. Small lit globes were attached at regular intervals to wooden planks forced into the stone. He could see thin lines of some sort of metal along the top lip. Turning his head as he passed, he stared at the globes. So did Buck, but West seemed unfazed.