More Than a Miracle 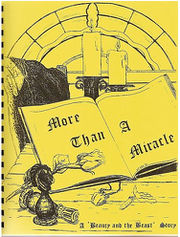 More Than a Miracle is a het 109-page Beauty and the Beast novel written and edited by Lisa Swope and K. Kimberly Prosser. Artwork by Barbara Gipson.

When did the bond between Vincent and Catherine really begin? What are its joys, trials, tortures? What is it like when this bonded couple really get to know each other, discarding the polite pedestals they've put each other on for so long, and get down to the nitty-gritty of a real relationship? [1]

In this novel we discover that Catherine's mother was once a Helper and surrogate mother to Vincent. This discovery greatly upsets Catherine. Readers should be aware that Catherine and Vincent spend most of their time fighting with each other which makes for painful reading at times, but all ends well. [2]

Excerpt from a Flyer

Vincent and Catherine traipsed back and forth from bedroom to living room until only one small box was left on her bed. Scooping it up, Vincent turned to carry it out only to have Catherine descend upon him and snatch it from his grasp.

"This stays." She clutched the box to her, smiled down at it almost conspiratorially.

Gently, tenderly, she lifted the lid. Leaning forward, he looked down at the object that was softly nestled inside. A stuffed toy lion lay there,looking up at him. Its muzzle was white and its eyes were bright brown, undimmed by the passing years. Waves of conflicting emotion rolled off his beloved, and Vincent absorbed it all. Fuzzy security was there...warm memories of cool sheets across small feet...furry noses against soft young arms...night secrets whispered to a wonderful friend...bad dreams shared...And through it all ran a current of love that Catherine could never have explained to the giant soul standing so close beside her. This was her lion, the first one of her life, and he was still special.

"May I touch him?" Vincent murmured. Catherine didn't look up from the box as she silently nodded her head. For a moment he didn't move. Then, carefully, reverently, he reached down and nudged the lion upward from his tissue paper bed. Looking from her friend to Vincent. Catherine watched closely, almost expectantly. What would he do with this, the dearest friend of her childhood?

Holding the lion in one hand for a moment. Vincent cocked his head and stared oddly down at the toy. Then, much to Catherine's bemusement, he smiled a soft, almost silly smile before lifting the lion to his face and rubbing it slowly against his cheek. She watched as he closed his eyes and rubbed the toy across his muzzle, then...sniffed? Bright blue eyes flew open and widened in the next instant, and Vincent took a quick step backward. He stared at the lion, then at Catherine.

"Where did you get this?" came the sudden demand.

"No." He shook his head, and a firmer denial was in the blue eyes. "What do you mean, no?" she bristled. Vincent saw her green eyes narrow at his challenge and lifted the lion once again. A further sniff was in order. Lowering the toy, he shook his head once again, the red-gold mane shifting softly over his broad shoulders. "No," he repeated obstinately.

"All right, Vincent." She snatched the toy from his fingers, held it protectively against her. "What's going on?"

His eyes followed the lion rather than meeting her gaze. Licking his lips once, Vincent shifted uneasily from foot to foot. Still those great blue eyes blinked solemnly down at the lion. A clawed hand snuck up to stroke the dull white mane.

Her jaw dropped at his words, for there was no mistaking the warm recognition in those blue eyes. Vincent still stroked that furry mane, caressed the familiar contours of the little stuffed body. "I know his funny little face," he murmured quietly, smiling as warm memories came pouring back. "Mary made him for me."

In this novel, learning that her mother had been a helper who knew and loved V when he was a child throws C into an agonized reexamination of her childhood and her present relationship with V, centering on their squabbling over a stuffed toy. V behaves with wounded, perplexed dignity; C sulks, whines, sinks into a depression. Excellently written, but C is about as repellently childish as you're ever likely to see her. [3]