Minus Ten and Counting: Songs of the Space Age

Minus Ten and Counting: Songs of the Space Age was a filk collection from 1983. 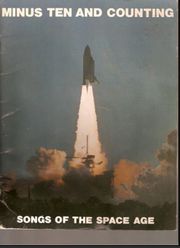 "The album was immensely popular in science fiction circles. After the 2500 original tapes quickly sold out, the album was distributed as a bootleg, with repeated copying by its fans. It has never been re-released because of copyright and personality conflicts among its contributors. Copies of the tape occasionally appear on eBay and sell for over a hundred dollars.... Performances of some of the songs can be found on Jerry Pournelle's website, and all of the tracks have been uploaded to YouTube." The album directly inspired the CD To Touch the Stars, which includes modern renditions of six songs from Minus Ten and Counting along with ten other songs." [1]