Mail Order Bride is a original slash 209-page zine by Bast and Sekhmet. It was a 2008 FanQ winner. The characters have the same name as those in Company Business and is a variation of that fandom. 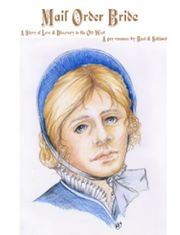 Summary from the publisher: "Summary: Samuel Boyd is a wealthy landed gentleman, who raises horses and cattle on his very large ranch in Wyoming. He's a fine house, fine land, a sizeable herd of fine horses and no wife. He's lonely. He reads an advertisement for a genteel lady from Russia who is seeking a gentleman interested in marriage and after an exchange of letters, meets and marries Petya. But Petya is Pyiotr, a young Count whose father's behaviour caused the family's ruin. Starving, without hope, he's taken this unusual chance to come to America. What he expected was that he would come, and soon be off on his own. But the necessary disguise of being a woman for the journey has taught him something about himself, and he delays leaving. Neither of them counted on falling in love." [1]