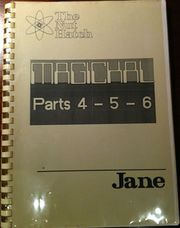 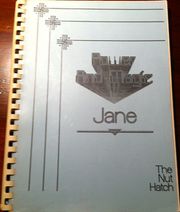 Cover of Power and Magic

The author emphasizes in several issues of Cross My Heart that this series "has absolutely nothing to do with Master of the Revels."

It was published in three volumes (on many zine lists, this is incorrectly labeled) which include stories which were first published in issues of the zine anthologies Cross My Heart and Fantazine. The first two issues are called "Magickal." The third issue is called "Power and Magic."

While it appears on zine lists for The Professionals, it is not Pros, but Pros-related. The stories concern Zax, the character Martin Shaw played in a futuristic British TV movie called Facelift about a world peopled with Names and Numbers. Zax is a Name. He's paired with a Bodie-clone called Scully, who is a Number, as they become involved with each other and with rebellion in their oppressed world. 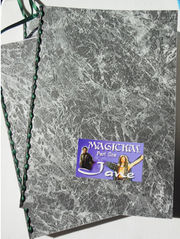 volumes #1, #2, #3, A4 pages, ribbon bound, hard card covers w/ small color picture on each. All art by JJ, including covers

"MAGICKAL Part 1 by Jane: begins the saga of Zax and Scully, based on Martin Shaw's film, FACELIFT. As in the film, Zax is part magician, part engineer, working out of a dressing room in a run-down theatre in an apparently wrecked or bombed-out London, "some years in the future." Add to this "our" Bodie, cast in the part of Scully ... a warrior, battle-scarred and world-weary, with dangerous connections to the underground army that is about to start a civil war against the "Numbers" from the domed city complex.

MAGICKAL Part 2 by Jane: continues the story of Zax and the anarchist soldier, Scully. The Magician lives, and the ruined city is a dangerous placxe to be. Crippled, ailing, hurt, Zax is on the run, and all he has left now, is Scully. It's Scully who gets the whole crazy company of entertainers out of the ruins and into the country, looking for a new place to begin ... and they find their way to an eccentric post-holocaust retreat.

MAGICKAL Part 3 continues the story of Zax and Scully in the future world of FACELIFT. The civil war rages throughout the wrecked city ... Zax is once again a prisoner of the Numbers, but the Chinese — long technical advisers of the Numbers — are watching, and when they support the Names the tide of battle turns. Zax and Scully are there to pick up the pieces, but their lives are about to take an unexpected new turn.

MAGICKAL part 4 In the aftermath of the People's Revolution, Scully's anarchist friends believe they have won and secured their rights to co-exist in the chaotic post-holocaust future. But he and Zax have underestimated the Numbers from other cities.The ramifications of the Revolution are far-reaching and unexpected. Cataclysm puts a full stop to the days of peace and the dreams of rebuilding, and once more, Zax is in the spotlight -- a spotlight he does not relish.

MAGICKAL part 5 Anger in the Chinese Democratic Republic is swiftly, after the senseless, wanton acts of violence which took place at the hands of the Numbers of Centre-07. Caught between the two factions, Zax and Scully are pawns whose struggle to achieve great things becomes simply a fight to survive. Senator Hua and David M4327 are trapped by their own machinations and in the end salvation comes from a most unexpected source!

MAGICKAL part 6 Senator Hua has resigned from his position with Central Committee after the deception and skullduggery which almost resul-ted in Zax's death. Tang has assumed responsibility for Zax's safety -- timely, as feeling in the CDR runs hot on the subject of Deviants. Zax and Scully prepare to flee for their lives, but are due a surprise. David M4327 is already on the base at Eratosthenes, where mining operations are producing the materials for a fleet of vessels. F9895 comes east for biocyber repairs, and meanwhile Zax, Scully and Bob are engaged on projects which are astonishing .. and dangerous. A crater called Eratosthenes on the barren surface of the moon is an odd place for the future of the human race to take shape.

MAGICKAL Part 7 by Jane: A Zax/Scully novel, first half of a story so large, it must be presented over two issues. Our heroes are in trouble, and this time the whole CDR is in it with them. It seems the future may not even exist, and hope may lie with the Deviant's skills, the engineer's knack, or with the automata themselves. Don't start this at 11:00pm if you value your sleep. Sexy too!

MAGICKAL Part 8 by Jane: The conclusion of the Zax/Scully novel that began in CMH #10. In this part, our heroes awaken in a whole new world. The CDR has gone haywire, and even in the colony of Tharsis, on Mars, there is a great deal of fear and very little freedom. Especially for those people who are about to lose their status as human beings. But Zax and Scully hold the key not only to the imminent civil war that is brewing on Earth, but also to the future. Zax's children ... Tang and Whiteswan ... Effnine and Farris ... all are part of the foundation on which the 'brave new world' will be built, but before it can begin, Zax and Scully must run greater risks than they ever ran before.

...a vast, sprawling saga spanning years and continents, richly illustrated. And guys, if you don't know the film, if you haven't seen the video ...! Hey, all you have to do is ask...!!

OVER 700pp IN ALL (!), braid bound in three volumes with in hand crafted covers Lavishly llustrated with art by Jade, and photographs throughout. Published for the first time as an omnibus in 1994."