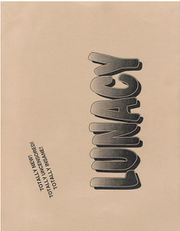 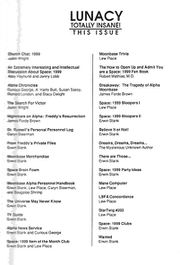 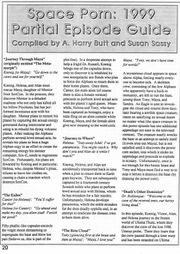 Lunacy is a 142-page gen and het Space: 1999 humor anthology. Most of the material was written and edited by Erwin Stank. There was only one issue.

"Card covers and well laid out. A vast assortment of whimsy, satire and farce based on 'Space:1999,' clever, often irreverent, even (mildly) obscene, with diverse styles and art by Lew Place. Among the articles: the alternative pornographic version of the series, Fred Freiberger's personal files, unknown merchandise, 'How to Admit You are a Space:1999 Fan' by Bob Mathias, spoofs of fan club newsletters, plus articles on bloopers and gossip. The wide variety of material includes some duds, but many hilarious hits. Many jokes go on for too many pages, but the core ideas are fun and energetic. The best example of humour in Space: 1999." [1]