Lost in a Crowd

memedocumentation identified the origin of the meme as a Steve/Bucky post on August 10 by jibblyuniverse.[1] As of October 2015, the post has over 46,000 notes.[2] 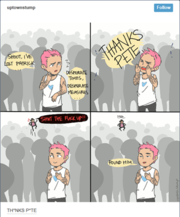 visual Fall Out Boy example by uptownstump, based on a post by genderfluidryanross. Contains a reference to a second meme, Thanks Pete.