Keep the Leap was a 1993 fan campaign created to bring Quantum Leap back to the air. 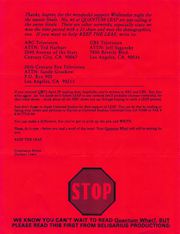 Much of this letter campaign was centralized through the zine Quantum What?.

There were similar fan campaigns for other shows: Star Trek, Beauty and the Beast, and Forever Knight are just three of them.

Thanks leapers, for the wonderful support Wednesday night for the season finale. No, we at QUANTUM LEAP are not calling it the series finale. There are other networks, especially since we won the time period with a 23 share and won the demographics, too. If you want to help KEEP THE LEAP, write to:

If you received QW?'s April 29 mailing then, hopefully, you've written to ABC and CBS. But, hey, write again! Let 'em know we'd follow LEAP to any network (we'd probably increase viewership for their other shows - think about all the NBC shows you sat through hoping to catch a LEAP promo).

And don't forget to thank Universal Studios for their support of LEAP. You can do that by mailing or faxing your letters and petitions to Harriet at Universal Studios, Universal City, CA 91608 or FAX # 818-777-0144.

You can make a difference, but you've got to pick up the pen and WRITE.

Please, do it now - before you read a word of this issue! Your Quantum What? will still be waiting for you. KEEP THE LEAP,