From Fanlore
(Redirected from Iolausian Library)
Jump to: navigation, search

The Iolausian Library is a large fanfiction archive for gen Hercules: the Legendary Journeys and Young Hercules stories. Well over 1000 stories are listed or archived.

The page was originally hosted by Geocities, before moving to a independent website in late 2004. Some of the stories were originally archived at Ceryndip's Sanctuary and moved to The Iolausian Library in 2006.

The site hosted writing challenges and the annual Iolausian Fan Fiction Awards (1999 - 2004). At its peak it had 130 contributing authors.[1]

Sometime during 2014 the independent website went defunct and the archive was moved to illuminatedspaces. 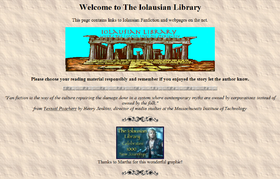