Invasion of the Klingon Empire

Invasion of the Klingon Empire is a Star Trek: TOS gen 75-page novel by John DuMaurier. There were 500 copies printed. Kang is a central character, It has many elegant maps of Klingon space and planets. 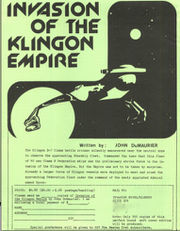 flyer from Off the Beaten Trek #3 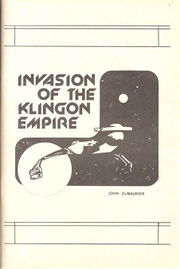 The Klingon D-7 Class battle cruiser silently maneuvered near the neutral zone to observe the approaching Starship fleet. Commander Fan knew that this fleet of 40 new Class E Federation ships was the preliminary strike force in the invasion of the Klingon Empire. But the Empire was not to be taken by surprise. Already a larger force of Klingon vessels were deployed to meet and crush the approaching Federation fleet under the commend of the newly appointed Admiral named Spock.

From the Zine's Preface

There existed from the above date, a treaty of peace between the united federation of planets and the Klingon empire. It was a forced peace placed upon both parties by the organians. The organians were a higher level of beings than either the Klingons or the many types of intelligent creatures that made up the federations diverse citizenry. They had the power to end conflict where ever it might be in galactic space. And they would use it! There were originally six conditions imposed upon the belligerents. This treaty endured for centuries in their time and permitted both the Klingon empire and the united federation of planets to develop and strengthen themselves. Now, in the time of the organian repose, which both the federation and the Klingon empire discovered to be a period of hibernation for organians that occurred every one thousand Terran years and lasted twenty-five years, the feeling of insecurity was felt in both federation and Klingon ruling councils. The organians could not interfere with either Klingon belligerency (or anyone else's for that matter) or contempt. They could only protect their own real realm through the use of a pre-set control field which immobilized any living entity entering its confines. They could not enforce the treaty of peace until their period of repose ended.

Thus, sets the stage for the invasion of the Klingon empire......