Hyrule: Taste of the Wild 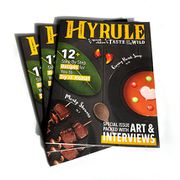 Hyrule: Taste of the Wild is a Legend of Zelda fanzine designed as a cooking magazine, an extended reference to the cooking ability in the game The Legend of Zelda: Breath of the Wild. It was sold on Etsy in 2018, with paper versions mailed out beginning in July 2018. Six artists worked on the zine: Shattered-Earth, Milkbun, Mayuiki, Finni Chang, Chiou!, and Onemegawatt; and recipes were written by Bryan Connor and Diana Ault. Content included in-universe recipes, advertisements, and interviews.