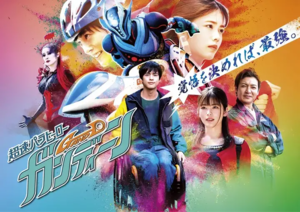 High Speed Parahero Gandine (also romanized Gundeen or Gandeen)is a 2021 Tokusatsu series that aired on NHK to tie in with and promote the 2021 Tokyo Paralympic Games. It consists of three 45-minute episodes telling a complete story, with a hook for sequels. It features multiple real Paralympians on the track and advising Daishi's coach on how to help him excel, but the actor playing the main character is not disabled.

English subtitles for the show were translated by Twitter user @watashiwachiaki, rather than one of the usual fansub groups who typically subtitle Toei tokusatsu projects. Although not a regular in Tokusatsu fandom she reportedly thought lead actor Okuno Sou was attractive and decided to pursue the the project since it was only a 3 episode series.

Daishi, a young paraplegic training as a competitive wheelchair racer, finds his life turned upside down when a fugitive alien crashes into his yard. The alien, named Goo, grants Daishi the power to call on an organic looking armor in order to protect him from his pursuers.

Daishi must grapple with his own feelings about his disability to become the hero Goo thinks he can be. Fortunately, he has a support network of family and friends who are cheering him on.

Signs by Neckspike a gen fic about Daishi helping Goo learn to communicate on his own.