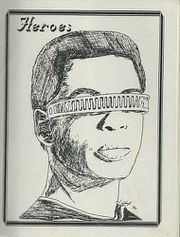 According to the editorial, the zine was intended to have some Star Trek: TNG content, explaining Geordi LaForge's presence on the cover, but circumstances prevented the intended contributors from finishing their stories, and "Fortresses" was included in their place.