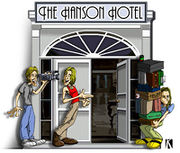 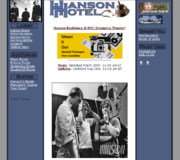 Screenshot of the website as it appeared in Apr 2002

Hanson Hotel was a domain, originally owned by Lisa and maintained by Becka Weisner and Cara which provided news, photos, music and more for Hanson fans. It was a massive and well updated archive in its early days, although the updates became less and less frequent in its last few years. Hanson Hotel was the Net Pick in the third issue of Hanson's official zine, MOE, with Hanson saying the following about it:[1]

A very cool site with more info than you can point a mouse at. It is available in framed and non-framed versions so it should be easy viewing no matter what browser you fancy. The page is frequently updated and keeps tabs on all of Hanson's appearances, be sure to check it out.

Hanson Hotel was one of the sponsors of HansonForums.net.

Starting in 2001, The Hanson Hotel Newsletter existed as a Yahoo! Group for fans of the site to receive updates.

Sweet Daze is a hanfic written by Lisa and Nancy from 1998 to 2000, and hosted by Hanson Hotel. It was the only hanfic hosted on the site.