You may be looking for any number of gen fanzines. 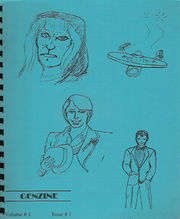 cover -- despite the "v.1 n.1" on the cover it was almost certainly the only issue

Genzine is a gen multi-media fanzine. It was published in 1988 and is a 159-page anthology.

About the publisher: "U.S.S. Shepherd NCC-1967 is a chapter of U.S.S. Konkordium which is an independent Star Trek Fan Club. Aurora Publications is an independent organization that helps publish "Genzine," along with its own publications, such as "Hailing Frequencies" and "Kolinahr".... U.S.S. Shepherd puts out The Gallifreyan Gazette which is a bi-monthly publication, coming out six times a year. "